“Pay no attention to the man behind the curtain!”

This is what the Wizard of Oz cries in desperation as he is unmasked as a mere mortal, issuing instructions to the inhabitants of the Emerald City from behind a curtain, his “magic” and might no more than a loudspeaker.

Champagne houses have traditionally been keen to keep the curtain raised between us and them, keen to preserve the mystery surrounding the process of turning the very ordinary still wines the region produces, into the sparkling nectar of the Gods that is Champagne.  Maybe they thought if we knew the prosaic truth, if we glimpsed the man behind the curtain, then the magic would be gone and Champagne’s image would suffer.
Personally I find the truth much more fascinating and think Champagne producers impress more when they share the details of the skill, hard slog and dedication needed to make their sparkling wines.  Tasting vins clairs (the still base wines which will be blended together in order to make the final cuvée) with Floriane Eznack of Champagne Jacquart this week, I was reminded just what a skilful job blending of wines for Champagne really is.

Floriane has a more complex job than many in Champagne, perhaps, as she is responsible for a brand that draws on wines made by three different wineries, which work together under the Alliance Champagne Co-operative.  In total, Floriane and her three cellar-master colleagues have 1,200 different wines to taste from October to December following the harvest each year.

And what wines.  These are the vins clairs, still wines made from just ripe grapes whose main characteristic is their screamingly high acidity.  Tasting them could not be described as any kind of pleasure.  And yet she and her team must evaluate each one with an eye to how it will marry with the many other elements of the blend, including reserve wines from previous vintages – as well as the small matter of envisaging how the whole shebang will taste once it emerges from the “prise de mousse”, the process of being made to sparkle.


After four months of work deciding on the blend, the wines will be bottled with yeast and sugar and put into the cellars for their second fermentation, which will result in the all-important sparkle.  Floriane still has years to wait, though, before she – and we – can judge whether her hard work has paid off.  The wines rest on their sediment, or lees, for a minimum of 3 years following fermentation before the removal of the sediment and the emergence of the final wine takes place.  Even then, though, more patience is required:  the wine understandably goes through a period of shock following the process of disgorgement needed to remove the sediment and needs time to recover and taste as it should.  For the cellarmaster, nerves of steel as well as skill are required.

If the wines I tasted this week go on to form part of Jacquart’s main blend, fittingly called Mosaïque Brut, they will not emerge in their final form until 2017 or 2018.  In the meantime, Floriane and team will have gone on to taste and blend three or more releases.  Everyone involved has to have a high level of confidence that they are getting it right – it will be too late to go back! 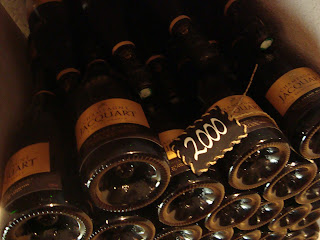 Interestingly, Floriane told us that creating the newly-released Cuvée Alpha prestige blend took only a couple of hours, compared to four months for the Mosaïque.  A wine produced in small quantities, made from the best of the best, I suppose, tends to make itself.  It does make me wonder, though, what Richard Geoffroy of Dom Pérignon does for the other 364 ½ days of the year.

The current Jacquart range is available from Great Western Wine and online at www.greatwesternwine.co.uk. 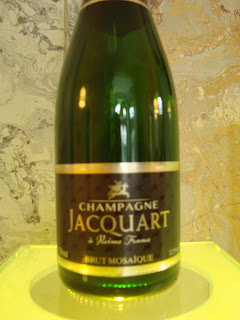 Jacquart Mosaïque Brut NV - £25 from Great Western Wine
The current blend is based on the 2008 vintage, so has had plenty of time ageing on its lees and in bottle.  It has a classic bready, brioche nose with notes of apple and apple skin.  The long ageing has given it depth of flavour combined with clean linearity and well integrated acidity.

Jacquart Blanc de Blancs 2006 - £39.50 from Great Western Wine
You might also see the 2005 in this country, which I have greatly enjoyed in the past.  The 2006 gives a sense of ripeness from the vintage.  Creamy apple blossom aromas lead onto a fairly broad palate with a definite spice and a lingering finish.  Blanc de Blancs is sometimes viewed as the ultimate aperitif Champagne but, as Floriane says of this wine, “a second glass of it needs food”. 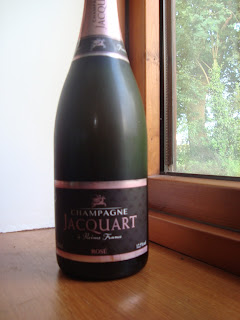 Jacquart Mosaïque Rosé NV - £32.50 from Great Western Wine (though on offer at £27.50 until 30 June)
Like most pink Champagne, this is made by blending in a small amount of red wine (made from Pinot Noir) into the regular white cuvée.  It’s a pale salmon pink and has nicely tart redcurrant fruit and a dry finish with notes of pink peppercorn and juniper berry – all this suggests an affinity with food, rather than being glugged on its own. 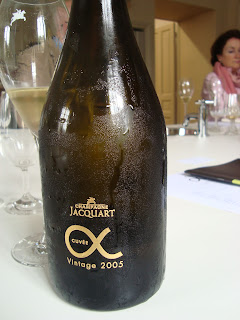 Jacquart Cuvée Alpha 2005 – £75 from Great Western Wine
Brand spanking new to the Jacquart range is this prestige cuvée, with just enough bling on the bottle so that people will know you’ve ordered something special if they see this on your restaurant table.  This inaugural vintage is a blend of 50% Chardonnay and 50% Pinot Noir that has spent seven years on its lees; it has delicacy in the form of hawthorn blossom, alongside more savoury bready-spicy notes and a structure to last.