It's not the economy, stupid - it's the doughnut

US wines in the UK have a problem and it's the doughnut.  Nothing to do with Krispy Kreme, but a metaphor for the US wines we see here:  lots of stuff at rock bottom prices and plenty of highly priced wines, but nothing in the middle.

When we talk about wines from the , we really mean , as the accounts for over 90% of the entire country’s wine production.  And for most wine consumers, their experience of Californian wine is at the cheap (and possibly cheerful, depending on your taste) end – Blossom Hill, Gallo, and their imitators.  These are the high volume powerhouses who have driven the to 2nd place in the league table of wine exporters to the behind , ahead of and .  The wines are straightforward, fruity and easy-drinking, often with a little sweetness (sometimes rather more than a little) to help them along.

On the other side of the doughnut, the is a great country to head for if you have a banker’s bonus burning a hole in your pocket.  is awash with trophy wines that will make quick work of emptying your wallet.  Screaming Eagle Napa Valley Cabernet Sauvignon 2007 had a release price of $1,500 a bottle.  But the production of just 800 cases plus a perfect 100-point score from influential critic Robert Parker means even that eye-watering price is purely academic – you would need to spend very much more than that to track down a bottle.

There has been much wailing and gnashing of teeth recently about the high price of ’s best wines in recent vintages, but the Bordelais are late to the game in reality.  It is that has been showing the way for years when it comes to creating icon wines with price tags to match.

The wines that are missing, the middle of the doughnut, are those that cost around £8-15, of which there are precious few in this country.  And this price range is exactly where interested and engaged wine drinkers tend to spend their money.  With nothing to speak of from , that wine budget will head instead for other countries with plenty to offer.

So what can I recommend to the curious yet not flush with cash wine drinker who wants to engage in some dreaming?  Not a great deal, to be sure, and the usual upper price limit is rather stretched, but here goes.

Au Bon Climat Chardonnay Santa Barbara County 2010 - £20.95 from Bros & Rudd
A standard-bearer for high quality Californian Chardonnay, this is as good a place as any to start our Californian wine tour.  There is oak (Americans do love a bit of oak), but it is always in a supporting role and doesn’t dominate the fine fruit.  This is never less than a pleasure to drink.

Qupé Roussanne “Bien Nacido Hillside Estate” 2008, - £30 from Majestic Fine Wine
Roussanne is a classy variety whose home is the in .  It makes wines with weight and body, but also with herbal lift and subtle aromas of stone fruit. Qupé have fashioned a complex, satisfying wine from it here. 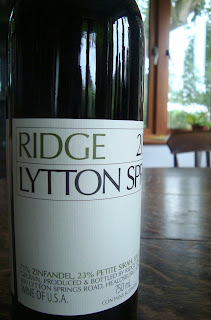 Ridge Lytton Springs 2009 - £26 from The Wine Society
Paul Draper, philosopher turned self-taught winemaker, has a suitably laid-back West Coast vibe to his winemaking.  He relies on natural or wild yeasts (the microflora in the air and on the grape skins, as opposed to commercially available specially selected yeast strains) and will let fermentations continue (or indeed stop and start) over months rather than the usual 2-3 weeks.  His wines, as a result, have wonderful depth, personality and finesse.

Zinfandel is renowned for making thumping great wines big on colour and alcohol and ripe (or over-ripe) fruit.  This Zinfandel-based blend, however, is positively light on its feet, with wild strawberry in amongst the dark brambly fruit and great freshness despite 14.5% alcohol. 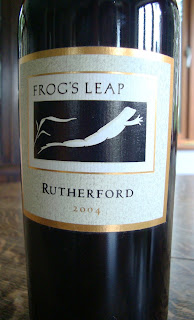 Frog’s Leap Rutherford Cabernet Sauvignon 2004 - £47 from The Wine Society
We are straying into icon (is that one word or two?) wine territory here.  There is no doubting that Californians tend to like plenty of oak and alcohol in their wines, so if that’s your bag, then explore away.  This wine, however, bucks that trend with 13.5% alcohol and very little new oak – and, like Ridge, uses native yeasts.

At eight years old it is just getting into its graceful stride.  The fruit is maturing and moving away from primary, fresh fruit flavours to aromas of tobacco leaf, spice and preserved fruit.  The texture is velvety and the flavours linger long on the palate – a real sensory pleasure.

With our exit from the Euro a couple of weeks back – what, you didn’t know? Yes, we lost to Italy on penalties in the quarter final. Oh THAT Euro, you say. This column has a proud history of hanging out in the shallow end of the pool of intellectual and political import, and it’s not about to change now and start providing incisive and telling insights into the economic woes of the Eurozone.

No, I merely remark that, once booted out of the Euros, we turn our sporting attention and wine goggles from footballs to tennis balls and Wimbledon, SW19.

Some sports lend themselves to stereotypes and the football versus tennis clash provides a rich source of inspiration. Tennis seems so much more refined, well-mannered, dare I say it, so much more Surrey darling, than football. Tennis players are undoubtedly athletes making great physical effort on the court – yet you don’t find them spitting on the grass between points, or doing that nasty footballer hold-one-nostril-while-blowing-out-of-the-other noseblow as they trot back to their chairs at a change of ends. And in general tennis players don’t question the personal habits or parentage of the umpire if a call goes against them.

The drinks that we associate with the two sports reflect these differences too. Years of hooliganism and drunken bad behaviour mean football fans at the ground itself are denied the pleasure of knocking back a bevy as they watch. But if they could, it would be hard to imagine them passing round pitchers of Pimm’s, being sure to get plenty of cucumber, strawberry and mint in their glasses. OK, maybe at Chelsea.

To my knowledge there has never been any crowd trouble when Wimbledon kicks out at the end of play, despite many spectators having consumed gallons of Pimm’s, on top of a few shared bottles of Champers over lunch. Mild irritation that public transport really could be better co-ordinated, outrage at the cost of strawberries and cream (“For what you get it must work out at over a pound per strawberry.”), wishing those women players wouldn’t shriek and grunt like pigs in labour, and so on seems to be as far as tennis goes in terms of aggro.

Assuming you are in the comfort of your own home and not stuck at Wimbledon itself, forced to shell out a fiver for a pint of sickly sweet Pimm’s, what is a suitable tipple to have by your side as you sit comfortably while the athletes in white disport themselves on a tennis court for our enjoyment?

Beaujolais
If there were ever a wine whose style fits this on-off, so-so summer weather, it’s Beaujolais. These mostly red wines (but see below) are full of vibrant, juicy fruit, yet are light of body and tannin. Always give them a bit of a chilling to heighten the refreshment value.

Beaujolais-Villages, Combe aux Jacques, Louis Jadot 2011 – from around £9.99 at Waitrose, Tesco, Budgens, Spar and Booths
This is the Beaujolais equivalent of Gordon’s Gin – the reliable standard that all others are measured against. Good balance of refreshing, juicy raspberry and cranberry fruit, with the tannins giving the palate texture. Textbook stuff.

Chiroubles, Georges Dubeouf 2011 - £9.99 at Waitrose (currently the 2010 vintage)
As you climb the Beaujolais quality ladder, the word Beaujolais itself is left behind and instead you find one of the ten “crus” or sub-regions on the label – in this case, Chiroubles. Remembering all ten is a wine-lover’s alternative to the pub quiz stalwart of naming the Seven Dwarves. The various crus reflect differing soils, aspects, altitudes – all those things which can be neatly summed up in the word terroir. Georges Dubeouf is one of the biggest names in Beaujolais, whose face, memorably likened to a “haunted parking meter” by Anthony Rose, each year launches millions of bottles of Beaujolais onto the market. This Chiroubles has perfumed fruit with generous black cherry and raspberry fruit flavours that scream summer drinking.

White Beaujolais
A few years back, a (non wine trade) friend asked me if I’d ever tried white Beaujolais. I looked for a sign in her eyes that she was winding me up. Was this some kind of test? Was this the wine equivalent of being sent to find some sky hooks?

A quick scramble to check reference books taught me that such a thing does exist and now, finally, I’ve tried some for myself. Made from Chardonnay, it represents only 1% of production from the region, so it’s not the kind of thing you’ll stumble across regularly. Beaujolais the region lies immediately south of Burgundy, the spiritual home of Chardonnay. Neighbouring regions fashioning white wines from the same grape they may be, but a casual drive from one to the other will tell you that they feel quite different. Where Burgundy is built on limestone, Beaujolais’ bedrock is granite, which informs the flavours of its wines. Here the Chardonnays feel softer and rounder, often with subtle herbal flavours alongside the ripe honeydew melon. If Scotland had the climate for wine-making, this is how I imagine its wines would taste.

They are not the easiest wines to track down, but if you put the effort in, you too can try the “What do you think of white Beaujolais?” question on someone - and watch them squirm. 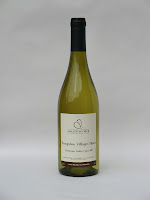 Beaujolais Blanc, En Fût, Jean-Paul Brun 2010 - £12.95 from Ox House Wines (www.oxhousewines.com) for the 2008 vintage
Ambitious and Burgundian in style, this barrel fermented and aged wine has flint and angelica aromas, fine acidity and great length.
at 02:09 No comments: