So, we all know the name, but what does it actually mean? Does Rioja refer to a style of wine? A grape variety? A region of origin? In fact, Rioja is the last of these three: a wine producing region of northern Spain.

Like most of Spain, vines and winemaking were introduced here by the Romans, a tradition which has continued ever since, albeit with a substantial break during the years of the Moorish occupation from 711 AD.

From the middle ages until the late 19th century, wine from Rioja, as in most parts of Spain, was made for consuming locally and with no great ceremony. Wine was a part of the peasant diet, no more, no less. Workers’ rations at a Riojan monastery in 1205 consisted of “Bread, cheese and wine at midday, bread and wine in the afternoon and bread, meat and wine in the evening.”

What changed Rioja’s fortunes was the arrival of phylloxera vastatrix in France in the 1860s. This splendidly-named vine pest from America attacked the roots of grapevines, causing them to die. Merchants from Bordeaux, whose vineyards were some of the first to succumb, travelled over the Pyrenées in search of substitute wines to sell – and Rioja is where they found what they were looking for.

These were merchants, not grape growers or winemakers, so they confined themselves to sourcing, blending and ageing wines from across the region. They also brought the idea of ageing in oak barrels with them – though it was American rather than French oak which dominated in those early years.

These two elements – blending wines from across the region and ageing in oak barrels – continue to be a hallmark of Rioja today.

After its initial success, there followed an almost inevitable rise to international fame, followed by a long period of whittling away at its own reputation by an industrial attitude to production and little respect for quality. Since the 1990s, however, thanks to greater competition from within and outside Spain, Rioja has been forced to up its game and to begin to justify its reputation once again.

Riojas ancient and modern
Marquès de Murrieta Castillo Ygay Gran Reserva Especial 2007 - £66 a bottle from Hard to Fine Wines and other independent merchants
Two Marqueses, de Murrieta and de Riscal, probably helped lure those first Bordelais merchants over the Pyrenées. Founded in 1852, Marques de Murrieta has been a constant feature of the Riojan wine scene ever since. This wine is made in the best years, mostly Tempranillo with 14% Mazuelo (aka Carignan), aged for 26 months in American oak, then a minimum of three years in bottle before release. This is a taste of tradition, with gentle maturing charms.

Marquès de Cáceres Rioja Reserva 2011 - £12.99 (mix six price) from Majestic
This bodega was the first to introduce new French oak to the region in 1970 and it continues to have a thoroughly modern approach to its wines: plenty of juicy fruit and only a little oak influence.

López de Heredia Viña Tondonia Blanco Reserva 2003 - £25.95 from Hennings, £28.50 from Woodwinters; Avery’s list the 2002 for £26
Yes, those vintages are correct. Viña Tondonia is an ultra-traditional, long-lived style of both red and white wine. In this white wine, Viura grapes (a humdrum, inexpressive variety) are transformed via six years’ ageing in barrel and more in bottle into a rich golden, bone dry wine of depth and elegance. It is fabulous with wild mushroom dishes or mature hard cheeses.
at 04:03 No comments:

Wine and dine your Valentine

Dry January, thank goodness, is behind us and the first official occasion of the year for making a bit of a splash, wine-wise, is upon us. Valentine’s Day is a perfect time to make a grand romantic gesture to your loved one – and if that gesture is a bottle of something, you get to share it too – win-win I’d say.

What to buy your Valentine?
The obvious choice is pink and sparkling, so here are some recommendations, from the budget bottle to the (very) grand gesture.

Langlois-Château Brut Rosé NV – from £12, The Champagne Company, winedirect.co.uk, Amazon, Cellar Magneval (Woking)
This is a crémant (made in the same way as Champagne) from the Loire Valley and given a distinctive character from  the Cabernet Franc grapes that go to make it. A delicate salmon pink, with a creamy mousse and real fruitiness with a little strawberry shortbread, it delivers plenty of flavour at the price. 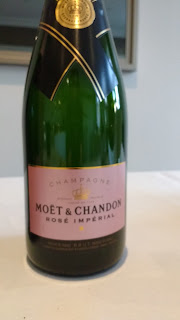 Moët & Chandon Rosé Imperial NV – RRP £43, Sainsbury’s, Majestic, Selfridges, The Finest Bubble
Moët’s supple, fruity style suits those new to the Champagne drinking lark. It has plenty of up-front, lively charm that is fresh and suitable for drinking on its own. A fine way to kick off the evening.

Laurent-Perrier Cuvée Rosé NV - £54.95 in a gift box at The Finest Bubble, £43.99 at Waitrose
Laurent-Perrier’s rosé Champagne is one of the few which gets its pink hue from contact of the skins of the black grapes with the juice – most are made by adding a certain amount of red wine to the blend. Whether one method or the other makes for a better Champagne is a point of debate, but this has undoubted appeal, from its distinctive bottle to the lively redcurrant-tinged fruit and fresh flavour. A magnum would taste even better, with more complexity and elegance.

Bollinger Grande Année 2005 - £94.95 at Finest Bubble (£92.95 each if you buy six – they won’t go off), £85-£88 at Drink Supermarket, The Drink Shop
I have a soft spot for this pink Bollinger vintage, which combines the power of the house style with such indulgent finesse. Slightly decadent, this is very much one for a romantic night in. 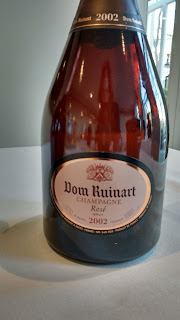 Dom Ruinart Rosé 2002 – RRP £200, Harrods, Selfridges, Hedonism Wines, Jeroboams and Finest Bubble (who offer same day or next day delivery in Surrey)
This is an utterly beguiling champagne which would surely win over any fan of fine white Burgundy. It is 80% Chardonnay, plus 20% of Pinot Noir as red wine. The colour is a mellowing coral with orange highlights and the nose is redolent of a maturing white Burgundy, combining rich and expressive fruit with a featherlight delicacy. The Pinot Noir gives spice and breadth on the finish and the wine’s long maturation on lees and under cork makes for exquisite complexity. This is one to savour over lobster or other rich seafood dishes.

Try before you buy
Cellar Wines in Ripley are putting on a free sampling of a range of wines this Saturday 11th February, including a couple of manager Andy’s favourite pink sparklers: Antech Cuvée Emotion Rosé 2014 from Limoux in southern France and Champagne Goutorbe-Bouillot Brut Rosé NV. And there’s 10% off single bottles on the day – there’s no rule that says you can’t be romantic AND canny.
at 02:01 No comments:

A wine by any other name...

Have you ever tried a wine made from the Aubaine grape? How about Luisant? Or Clevner? You might think not, but I am prepared to bet that you have. If I tell you that these are all aliases for the same grape, and that one of its other synonyms is Chaudenay, then perhaps you’ve guessed its better-known name.

Yes, Chardonnay, the most widely planted white grape in the world, is known by all these names – and many more.

How does this happen? In the days before ampelography (the science of grape vine identification), commercial vine cutting propagation and import controls and quarantine for plant materials, it’s easy to imagine how a variety, either newly arrived in a region, or already established, could end up with a myriad of aliases, with growers free to decide on a name.

Cabernet Sauvignon is sometimes known as Bordeaux in Switzerland and Bordo in Romania – a neat illustration both of how grape varieties are often known by their (sometimes supposed) origin, and how those names can mutate as they cross national and linguistic boundaries.

Not that a grape variety needs to travel very far at all to be given a different name. Some of the very many synonyms for Cabernet Sauvignon, purely within its native Bordeaux, include Bidure, (Petite) Vidure, Bouchet, Carbonet, Carbouet and Marchoupet. Carbonet may derive from Cabernet, but the others seem to bear little or no relationship to the now official name.

Just how do grape variety names come about? Some are cryptic to us now. But they sometimes refer, as with Cabernet Sauvignon and Bordeaux, to the geographical origin. Or they describe characteristics of the vine itself – such as Pinot Meunier. Meunier means “of the miller” in French, and the vine’s leaves have a whitish floury dust on their undersides. But in other cases and with vine names often dating back many hundreds of years, their origins can remain mysterious.

Take Aglianico, a black grape famed for making deep-flavoured, smoky and tannic reds in Campania, southern Italy. The name has been thought to be a mangling over the centuries of the Italian word “hellenico”, meaning Greek. For quite a while, an accepted hyphothesis was that this variety may have been brought to Italy by the wine-loving Greeks. However, since the emergence of DNA profiling – yes, it’s not just used to catch criminals – we know that Aglianico bears no similarity to any current Greek variety, but that it does share genetic similarities with other black grapes of southern Italy. So bang goes that theory.

DNA profiling has also taught us that California’s “native” variety Zinfandel is in fact identical to southern Italy’s Primitivo – and that both are synonyms for a Croatian variety called Tribidrag. Somehow I doubt California’s winemakers are going to swap Zinfandel for Tribidrag on their labels.

As well as the same variety having bewildering number of aliases, the opposite is also true, where the same name has been given to what are, in fact, distinct varieties. The most renowned of these is Malvasia, a name which you will find on white wines from the Canaries, via Madeira (where we Brits wrangled it into Malmsey), Portugal, Spain, France, Italy and Croatia. Sometimes it is the same Malvasia, often not.

How grapes get their names can be mysterious – at other times it can seem rather obvious. Returning to Cabernet Sauvignon, it seems tempting to wonder whether it could perhaps be related to the red Cabernet Franc and the white Sauvignon Blanc? Well yes, thanks, again, to DNA profiling, we now know that indeed it is the offspring of these two parent varieties. Sometimes the answer really has been staring us in the face all along.
at 08:32 No comments: