Bordeaux - it's big, but is it clever?

Bordeaux must be the world’s most high profile wine region.  Even someone with only the most sketchy wine knowledge would surely be able to name Bordeaux as somewhere that makes wine.

It’s certainly big, turning out a greater volume of wine than almost any region of France, except the vast swathe of vineyard in Languedoc-Roussillon to the south.  In terms of quality, it is both big and beautiful, as the largest fine wine region in the world.

The region is so big, in fact, that there is not a single classification that covers all of its vineyards.  Additionally, the various classifications that exist – and there are five – relate to only around 5% of the total volume of wine produced in Bordeaux.  The best known classification is that dating from 1855, when 4 Châteaux were designated as Premier Cru (or First Growth), and so on down to Fifth Growth.  The original First Growths were Châteaux Latour, Lafite-Rothschild, Margaux and Haut-Brion.  This classification has remained unchanged, save for the elevation of Mouton-Rothschild from Second to First Growth in 1973.

The original list of growths was governed by the price commanded by the various Châteaux, rather than an attempt to assess their relative quality.  As far as the First Growths go, their ability to command the highest prices still holds true today.  However, further down the ranking, things become more complex:  there is a semi-official category of “Super Second” Growths, who have the ambition – and, they argue – the quality to put themselves on a par with the First Growths.  Cos d’Estournel is the most famous (or possibly infamous) example.

At the other end of the scale are Châteaux who cling to their ranking in the 1855 classification, yet the quality of whose wines now clearly does not live up to their historic billing.  It would be ungenerous of me to give any examples but, as ever in Bordeaux, price is the best indicator of perceived quality.

If you are wondering what the other four classifications of Bordeaux are, they are: Cru Classé de Graves, Grand Cru Classé de St Emilion, and Crus Bourgeois and Crus Artisans in the Médoc.  Unlike the 1855 classification, most of the others have attempted, some with more success than others, to update their rankings.  St Emilion has been mired in an attempt to re-organize its classification since it published a revision in 2009.  Legal challenges meant that this 2009 version was never fully implemented and a further revision, published in 2012 has, quelle surprise, itself in turn been challenged in the courts by properties facing demotion.  The removal of a “Premier” from a “Grand Cru Classé” may seem a minor change, but it could have dire consequences on the price the wine can fetch, not to mention the career prospects of the winemaker involved.

I had often wondered why the Bordelais hadn’t instigated a single classification for the whole region, but I think this legal tussle in St Emilion has provided the answer:  there is no way that it could be successfully done in a way that wouldn’t provoke mass law suits and boycotts.  The famously never-classified vineyards of Pomerol, including “First Growth in all but name” Petrus, would surely resist any attempt to include them, as they have done very nicely, thank you, without any classification.  Lawyers in the region might be the only people to relish the prospect.

But, leaving aside all this high falutin’ wine that most of us will drink rarely, if at all; the kind of Bordeaux that we see most often has no more grand classification than the standard Bordeaux AC, or Bordeaux Supérieur AC.  The Supérieur version, incidentally, is merely higher in alcohol than its generic Bordeaux sibling.  Together they account for around half of all Bordeaux produced.  If you take a look at any bottle of claret on a wine merchant’s or supermarket’s shelves at under £10, this is what you are likely to find.

The frustration (but also the joy, for those in the know) is that this huge category covers a vast range of wine quality.  While judging a good number of generic red Bordeaux at one of the major wine competitions this year, I was struck that many of the wines, probably at the lower end of the price range, felt like exercises in problem solving, with under-ripeness and cheap oak featuring too often.

The bad news is that Bordeaux is too big and still produces too much wine that fails to please, or even to find a market in the first place.  Especially in patchy vintages like 2012, many lower-priced Bordeaux won’t be much fun to drink.
Is there good news?  In a word, yes.  Overall, quality has never been higher as those winemakers who manage to flourish are forced to up their game in the face of falling domestic wine consumption and competition from the New World in export markets.  Bordeaux, above rock-bottom prices, can be a source of good quality wines for everyday, not just collectors’ items and investment vehicles.

A useful resource to help you separate the wheat from the chaff is an annual selection based on blind tasting to choose the best Bordeaux wines that offer great value between £6 and £20 a bottle, selected by a panel of experienced tasters and educators.  You can browse the selection here:  http://www.bordeaux.com/uk/wines/selection.  Happy hunting.

Hey babe, take a walk on the wild side

It’s easy to become mired in an, albeit very comfortable, wine-drinking rut.  A glass of your favourite New Zealand Sauvignon Blanc/Rioja/Spanish rosé (delete as appropriate) of an evening is like slipping on a pair of comfy slippers, or settling into the sofa to watch an episode of Midsomer Murders.  It’s all about comfort and familiarity, immersing yourself in something you know you are going to enjoy, without the need to make an effort.

Every now and again, however, we need to give our comfortable lives a bit of shock treatment, shake things up, upset the routine.  Some very energetic people might consider taking up a new sport or learning a new language in order to challenge themselves; I get my thrills from trying new grape varieties from unfamiliar places.

I got the chance to take a walk on the wild side and undertake a mini grape variety safari this week, at a tasting billed as “Emerging Regions”.  Some were more emerging than others:  Spain? Chile?  Germany?  Some were genuinely new to wine production, such as India.  Others were emerging only in the sense that their wines are as yet relatively unknown here in the UK, yet wines have been made there for hundreds, if not thousands, of years.

There is a fairly genteel and slow motion spat taking place in the wine world at the moment, concerning the origins of grape-growing and winemaking.  Archaeological evidence from Georgia and the Transcaucasus region provides evidence for winemaking there since 4,000 BC, with many believing actual winemaking going back further, to 7,000 BC.  However, the more recent science of DNA analysis has thrown up additional, and perhaps contradictory, evidence which could mean that Turkey was the cradle of winemaking, perhaps as far back as 9,000 BC.  Whatever the outcome of this academic tussle, what is clear is that Georgia and Turkey are home to a host of unique grape varieties, many of which may be very ancient in origin.

If you come across Georgian wines, you’ll be faced with an intriguing choice of tongue-twisting grape varieties such as the white Mtsvane and Rkatsiteli, plus the more user-friendly red Saperavi, often fermented in Qvevri (large terracotta vessels, similar to ancient amphorae). 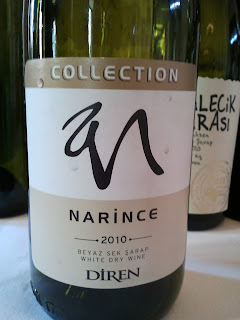 Over the border in Turkey there is another world of native varieties to discover.  The names can look scary, but the secret seems to be to go at them with gusto, imagining yourself an Italian speaking German and deliver them with confidence.  Unless you are speaking to a native Turk, they probably have no more idea than you do.  I found the whites I tasted made from Emir and Narince pretty simple, but the reds from Öküzgözü (or ox eye in English), Kalecik Karasi and the splendidly named Boğazkere (meaning throat scraper!) full of character and appeal.  Look out for them the next time you eat in a Turkish restaurant, as this is still where you’re most likely to find them at the moment. 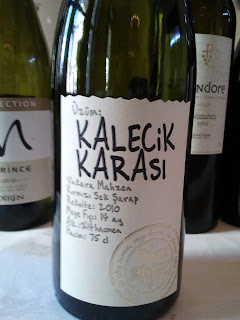 I admit to having wine-spotter tendencies.  I don’t possess a notebook listing all the varieties that I taste and hardly ever wear my anorak except for country walks.  However, I do get a bit of a kick out of trying new and unusual grapes, so the Emerging Regions tasting was a happy hunting ground. 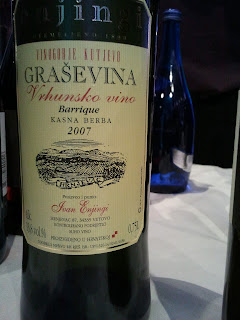 Graševina from Croatia may be more familiar to you than you think, if you’re a wine drinker of a certain vintage.  I remember my Dad picking up a bottle of Lutomer Laski Riesling from Peter Dominic back in the Seventies, presumably for the ladies to sip with their beef stroganoff – Graševina is that same grape.  Freed from lowest common denominator collective farming and the dead hand of state-controlled wine-making, it makes a nicely peachy, soft and flavourful wine.  Dropping the Riesling from the name is also helpful – it is not related to that grape, which (very unfairly) has its own image problem in this country.  More complex white wines are also made from the Pošip grape, primarily on the Croation islands of Dalmatia. 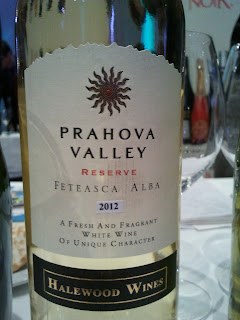 Romania is having something of a success at the moment with its soft, spicy and very reasonably priced Pinot Noir.  I hope that consumer acceptance of the notion of quality wines from here will also help to open the way for the country’s cracking native varieties:  the white Fetească Alba and especially its black counterpart Fetească Neagră deserve a wider audience.  Not as easy to say as Pinot Noir, perhaps, but worth searching out. 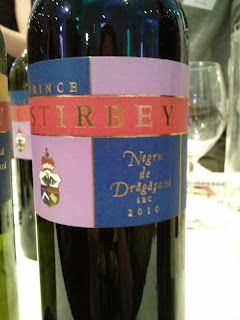 I rounded off my grape safari by bagging a brace of Macedonian varieties – white Zilavka and red Vranec (or Vranac).  The red, in particular, impressed me with its full-bodied, dusky spice and black fruit.
After all that vinous adventuring, did I continue the theme with a glass of something new and stimulating with dinner?  Nah, a glass of Rioja and a bowl of chilli con carne did just fine. 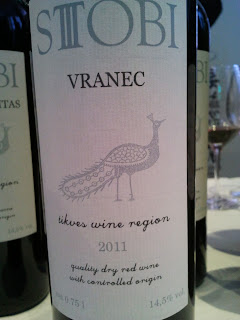 Searching out the new is all very well but, in the wise words of Ol’ Blue Eyes himself, “It’s very nice to go travelling. But it’s oh so nice to come home.”
at 01:36 No comments: