Do wine and music mix?

If you tune in to Classic fm on a Sunday afternoon between now and Christmas your ears will be massaged by the unmistakeable and mellifluous tones of Simon Callow (he of Four Weddings fame) as he embarks on a musical travelogue. The plummy voiced actor and writer (I specify, lest there be any confusion with the high-waisted trouser wearing creator of X Factor, Simon Cowell) plays a selection of classical music tunes, focusing on a particular part of the world each week. 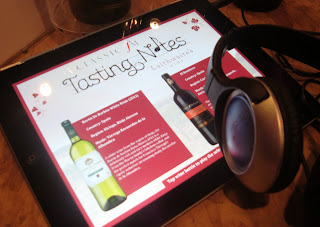 Thanks for the tip, you're thinking, but what, prey, is the connection with wine? At points along his musical journey, Simon Callow makes mention of a suitable glass of wine to have to hand as you listen to the music. Laithwaite's, the wine merchant, is the sponsor of the programme, dubbed Tasting Notes, and listeners can order a taste-along case of wines mentioned in the programme.

Last week listeners travelled, virtually, through Hungary and enjoyed some of the best known pieces of music to emerge from that country, with a recommendation of a glass of a Laithwaite's Hungarian Pinot Grigio to accompany them. In the second half of the program Simon moved on to a tour of Spain, a glass of Navarra rosé in hand. 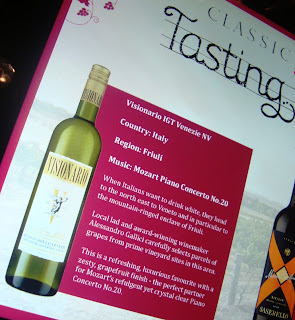 The thinking behind the show's format is that listening to an appropriate piece of music can enhance the experience of drinking a particular glass of wine – and a glass of wine can certainly enhance one's listening pleasure. What of the science of it? Well, there isn't any really, but there is no arguing with music's ability to alter our consciousness; to heighten the senses. I know that certain songs have the ability to transport me to a certain time and place from my past. And if drinking wine isn't in some way altering our consciousness, then we must be doing it wrong.
Classical music and wine is all very well, but what if you're a bit more low brow and popular culture in your tastes? I have to confess to being something of a classical music numpty; my collection comprising the predictable mixture of Vivaldi's Four Seasons, Mozart's Requiem and a couple of operas.

Listening to Classic fm this week, however, has inspired me to try out my version of music and wine matching, but based on my own musical tastes.

There are myriad theories about how to match wines with food: from matching the flavours and “weight” of the dishes you are eating with your wine selection, to using the wine instead to create a contrast and to somehow “cut through” the food flavours, and many more in between. I've taken inspiration from this clearly unscientific approach to come up with my own wine and music matches.

If you are listening to Coldplay (and I understand that some people do) and wish to embrace the idea of matching the feel of the music to the wine, then you might pair the banal ubiquity of Chris Martin and his merry men with a corresponding wine. And nothing says banal ubiquity in wine terms like Pinot Grigio. However, the two together sound like a recipe for narcolepsy, so it might be safer instead to choose a wine that will act as an antidote to the whale music and go for something bracing, zesty and full of life – a bone dry Clare Valley Riesling from Australia springs to mind.

Drinking anything with a sparkle, but most especially Champagne, betokens celebration. But sometimes you don't have anything to celebrate particularly, but fancy the Champagne anyway. For such an occasion, the jaunty nihilism of The Smiths' “There is a light that never goes out” feels right:

If a double-decker bus crashes into us,
to die by your side is such a heavenly way to die.

Or if the thought of a violent death, even when accompanied by so much jolly, jangly guitar, is too much of a downer, then a more conventional music choice might be Badly Drawn Boy's up-beat “All Possibilities”.

Is there a style of music that harmonises naturally with red wines, which are surely what most of us crave at this dark and cold time of the year? For me the rich velvet tones of Nina Simone suggest a glass of something red and robust. Nina spent her final years in the south of France, so a drop of complex, rich and powerful Châteauneuf-du-Pape would be a fitting candidate.

There are of course, many songs which mention wine and drinking which suggest an obvious link between music and wine. Popular though singing about drinking may be, it is not without its pitfalls. Joni Mitchell's boast that:

on her classic album, Blue, would surely fall foul nowadays of sensible drinking guidelines. Perhaps she should have gone on to specify that she meant a case of alcohol free beer. Likewise the popular Cockney sing-along “Roll out the barrel” might need to be modified along the lines of:

She never drinks the water and makes you order French Champagne.

French Champagne? Does he not know that the body charged with protecting the Champagne name spends many Euros every year to ensure we only ever apply it to sparkling wine made in the approved method within the designated Champagne region in France? Ricky, you may be an expert on Latin-tinged pop, but when it comes to understanding the French Appellation Contrôlée system, you have A LOT to learn.

The hills have wines...

“Someone really ought to plant some vines there”, I’ve often opined to myself as I drove along the A25 between Newlands Corner and Dorking, looking up at the south facing chalky swathe of the Surrey Hills.  Well thankfully “someone” has done more than idle daydreaming and actually gone and created a vineyard there. 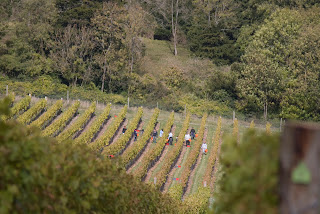 The man in question is Nick Wenman, and his 13-acre patch of vines, Albury Organic Vineyard, is part of the Duke of Northumberland’s Albury Estate.  I first stumbled across the vines on a walk to Silent Pool last winter and was intrigued to find out more about the place. 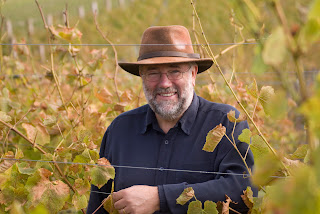 I finally caught up with Nick on the last day of harvesting of the 2012 vintage.  This year, as anyone who hasn’t spent the last six months abroad will know, has been grim on the weather front.  Unseasonably cold, damp conditions have dogged us since the balmy, warm days we enjoyed in March.  This kind of weather is unkind to any form of fruit growing, from adversely affecting fruit set at the beginning of the season to threatening the final crop with rot at the end of it. 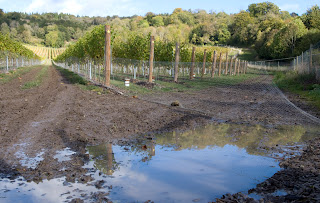 Luckily for Nick, however, he does have a crop – albeit a small one – this year.  Nyetimber, one of ’s foremost producers of sparkling wine, announced recently that it will not make any wine from this year’s harvest.  That made waves in the national press and 2012 will doubtless not go down in history as one of the best for English winemakers.

There will be more positive memories of the year for Nick, though, as his still wine, Silent Pool Rosé 2011 was one of only three English wines chosen to be served on the royal barge during the pageant in June, as part of the Queen’s Diamond Jubilee celebrations.  How long ago it all seems now. 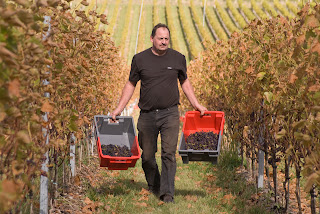 The ultimate goal is to produce an Albury Estate sparkling wine, hopefully in time for Christmas 2014, though the real volume of wine will not be on stream until 2015 or even 2016.  Bearing in mind that the first vines were planted here in 2009, you can see that becoming a producer of sparkling wine in this country requires dedication, patience - and deep pockets.

Why does it take so long?  Vines take 2-3 years from planting to produce a viable amount of grapes to constitute a crop.  After that hurdle has been crossed the grapes harvested will initially go through a first fermentation, which produces a regular still wine.  A second fermentation in the bottle is required to produce the fizz, followed by a period of maturation before the wine can be released.  This process can’t be hurried and unfolds over a period of 2-3 years if you are looking to make a quality product.

Hence the attraction of releasing the Silent Pool still rosé, which can be released a few months, rather than years, after harvest.  The wine acts as an aid to cashflow and helps put Albury vineyard on the marketing map.

You could not accuse Nick Wenman and his team of taking the easy option.  As well as embarking on a wine journey that will take the best part of a decade to come to fruition, the vineyard is also certified organic - 2012 will be the first organic wine to be released. 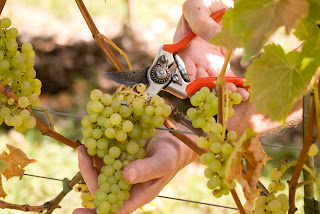 Not content with the tricky task of using organic methods in a challenging climate, they have also converted to biodynamics.  If you’d like the one sentence summary of biodynamics it’s:  an holistic approach using organic methods plus specific “preps” on the soils, with vineyard operations timed to harmonise with the movements of the moon and planets.  Sound bizarre?  For more detail on what this means, and who else is doing it, you can take a look at a post from my blog on the subject: http://heatherdougherty.blogspot.co.uk/2008/04/organic-and-biodynamic-wines.html

What with a small 2011 production and the great Jubilee-related publicity for their rosé, Nick has had no trouble selling every bottle he has of the wine this year – sadly this means that, unusually, I can’t tell you where you can taste these wines for yourselves.  There will be a small amount of Silent Pool Rosé 2012, made from Pinot Noir and Pinot Meunier, available locally next year – but the crop is only around 25% of what Nick would have hoped for, so you’ll have to look sharp to grab a bottle when it does appear.

In the meantime, here are a couple of English wine recommendations that you will actually find in the shops now.

Stopham Estate Pinot Gris 2011 - £15.50 from Hennings, various branches in and other local independent merchants
The 2010 vintage was selected by Jancis Robinson MW as one of her wines of the week and sold out pretty quickly.  Luckily the new vintage is as good, with true varietal style, fruit and elegance.  Their Pinot Blanc was also chosen to be served on board the Royal Barge for the Jubilee celebrations.

Ridgeview Merret Bloomsbury 2009 - £22.99 from Waitrose and various independents
Ridgeview Estate, at Ditchling in , have been making a range of top notch English sparkling wine for years now.  Their wines are consistently good across the board, so if you see the name Ridgeview, trust me, it’ll be a good ‘un.  This elegant Chardonnay-dominant blend has Pinots Noir and Meunier in support and is their most popular and signature cuvée. It would not disappoint any afficionado.

Here’s hoping that, in three years’ time we will be fêting the success of ’s very own Albury Estate sparkling wine.  Cheers!

All photos courtesy of John Powell, Albury Visual Services
at 05:54 No comments: