Will you be an eagle - or Eddie the Eagle?

The whiff of Catherine wheels, rockets and bonfires in the night air has faded. Children have long since consumed their body weight in Hallowe'en (trick or) treats. The last hurrahs of Autumn have passed and now we stand at the top of a precipitous slope, like an alpine ski jumper, nervously adjusting our goggles as we contemplate that impossibly steep and slippery descent which leads inexorably to...Christmas.

We all hope for a steady run as we hop on to the festive ski jump: crowded, stuffy shops successfully negotiated, presents bought, no-one forgotten, meals planned, wrapping paper remembered. If we get it all right it will culminate in a graceful landing on the big day itself, having overcome the seemingly impossible.

That's the dream. The nightmare is a wobbly start to our descent: online ordering deadlines missed, the things you wanted sold out, or maybe you haven't got any good ideas to start with; somehow, ordering the turkey slipped your mind.....

The nightmare result is less like an eagle soaring effortlessly through the sky, and more like Eddie the Eagle. 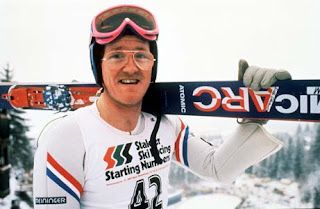 Eddie, lest you have forgotten, was a British downhill skier who had failed to qualify for the British Olympic ski-ing team. He alighted on the clever tactic of switching to ski jumping, where he was assured of qualification, as there were no other British competitors.

Eddie thereby found himself representing his country at the 1988 Winter Olympics in Calgary, but was woefully under-financed and under-prepared - at one point financing himself as a part-time plasterer while training in Finland. Matters were not helped by the fact that he suffered from such poor sight that he needed to wear glasses to jump – which fogged up in the cold conditions. Dubbed “Mr Magoo”, he resembled, not an eagle, but something more akin to a penguin which had been launched unexpectedly into the air, and then crash-landed and scrambled onto the ice. Eddie denied that he was scared of heights – but he did admit to being scared of jumping.

Despite this unpromising start, Eddie, undaunted, won international acclaim for his pluck and determination to compete. Unfortunately that was all he won, as he came last in both of the ski jump events – and thus the legend of Eddie the Eagle was born.

I may not have much to offer to help you with the myriad of organisational tasks that need to be accomplished between now and the end of December – but in matters vinous I can be of assistance. Over the next couple of columns I'll be making specific recommendations on which wines to have on hand for the variety of social occasions that the festive season brings, along with my top tips for a glittering Christmas.

So as far as what on earth to buy for the spouse who has everything, or that sourpuss in-law who never seems happy, no matter how much money and effort you expend – I'll have to leave you to your own devices. However, if you can start by welcoming all your guests with a glass of something cold and sparkling and flashing a winning smile, then any other imperfections will surely be forgiven. Just don't forget to order the turkey.

In the meantime, here are some wines deserving of your attention. This week's wine recommendations are not specifically Christmassy, but are designed to soothe and delight over the colder, longer evenings between now and December. 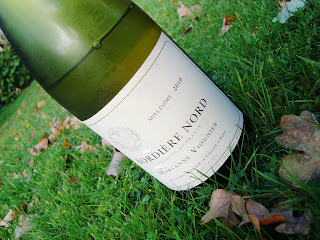 Bordière Nord Marsanne Viognier 2010 - £6.99 (or buy 2 for £5.99 each) at Majestic
Marsanne and Viognier are traditional grapes of the Rhône Valley, but have been transplanted here to the warmer Languedoc by the mercurial Alain Grignon. This is a great value winter weight white with bags of unoaked tropical-tinged peachy fruit, combined with a herbal twist courtesy of the Marsanne. Full-tasting and warming – great as a party wine, but the trace of herbal bitterness makes it food-friendly too. 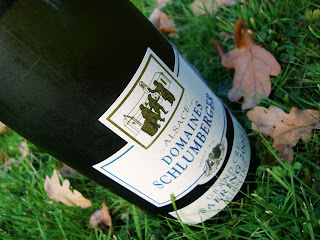 Domaines Schlumberger Riesling Grand Cru Saering 2007 - £18.95 from slurp.co.uk
I'm not going to beat around the bush. It's time wine drinkers got over their unfounded fears of Riesling, and especially of Riesling in these tall “flute” shape bottles. This is a fantastic wine from Alsace, in northeastern France, and it's DRY. Winemakers who can grow it love Riesling, the wine trade loves Riesling, I love Riesling – please put a stop to all my banging on and try some!

This sprightly wine has lots of lime with a hint of peach and even a little orange rind on the nose. The palate is dry, with a lip-smacking mineral tang and the limey flavours really linger. It's quite weighty and with a citrus pith bitterness too – really should be had with food and it was great with a chicken risotto. Very good and totally, deliciously moreish. 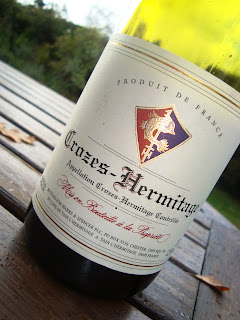 M&S Crozes-Hermitage 2008 - £10.99 from M&S
This 100% Syrah from the northern Rhône valley is made for M&S by the quality-minded Cave de Tain Co-operative and is exactly the kind of red wine you want to relax with at this time of year. The nose has loads of black fruit, along with some herbs and spices. The palate has more of that lovely brambly fruit with a real black pepper kick. Have it with a winter casserole – or just by the fire, with slippers.