Little and Large in the Languedoc

Bad news stories about French wine are ten a penny: falling consumption, losing ground to the New World, too much poor quality stuff still made. However, the picture is not entirely bleak and there are also many success stories to be told – and I do not just mean Bordeaux First Growths lining their pockets thanks to cash-rich Far East investors.

The Languedoc, the world’s largest wine-making region, covering a vast swathe of southern France, has, as you might imagine, its fair share of what might politely be called unambitious wines. However, it is also home to quality-minded producers, proud of their unique terroirs, their old vines and confident in the region’s ability to make top notch wine.

Languedoc is also a stronghold of wine-making co-operatives, organisations which unite independent growers who provide their grapes (or sometimes juice) to a central facility which makes, matures and bottles the wine; and finally, markets it. It’s clear that such a model does not automatically drive high quality production – in less switched-on co-ops, where growers are paid based on the amount of grapes they deliver, there is little incentive to focus on quality, by maintaining vineyards with lower-yielding old vines for example – or on such concerns as sustainability.

In today’s competitive wine market there is ever less room for such a quantity-driven approach, however. Those wine co-operatives which are thriving nowadays are those which are dynamic, forward-looking and who embrace modern technology, but who also respect what growers with valuable vineyard plots are able to provide them, focusing on quality rather than quantity. Off the top of my head I’d point to Plaimont Producteurs in France’s Southwest, the Caves de Turckheim and Ribeauvillé in Alsace and Mailly Grand Cru in Champagne as co-ops which fit this description.

Vignobles Foncalieu, headquartered near the impossibly picturesque medieval walled city of Carcassonne, near Toulouse, have also showed that they are determined to aim higher in their quest to provide a market for their 1,200 individual growers stretching from Gascony to the Rhône Valley. Those growers tend 5,000 hectares of vines and produce 23 million bottles of wine annually.

At those levels of production, it would be foolish to say that quality is uniformly high, but it is certainly true that Foncalieu, under the leadership of President Michel Bataille, is focused on driving up quality and moving away from the “stack ‘em high, sell ‘em cheap” mentality.

As part of their push towards the top, in 2012 Foncalieu bought the well-regarded Corbières estate, Château Haut-Gléon, which it now runs as a kind of business within a business. Its wines are hard to find in the UK currently, but if you would like a taste of what the sleeping giant of Corbières is capable of, keep your eyes peeled for them. Perhaps the best way to sample Haut-Gléon’s wines is to go and stay at the Château itself, which has been refurbished to provide luxurious accommodation.

But as any student of marketing knows, there is always more than one strategy for success in a market. To say that Domaine Jones is at the opposite end of the scale to Foncalieu is to risk understatement. Founded, owned and run by Katie Jones, this pint-sized winery in the Fitou region of Languedoc makes just 20,000 bottles of wine a year from 10 hectares of vines. 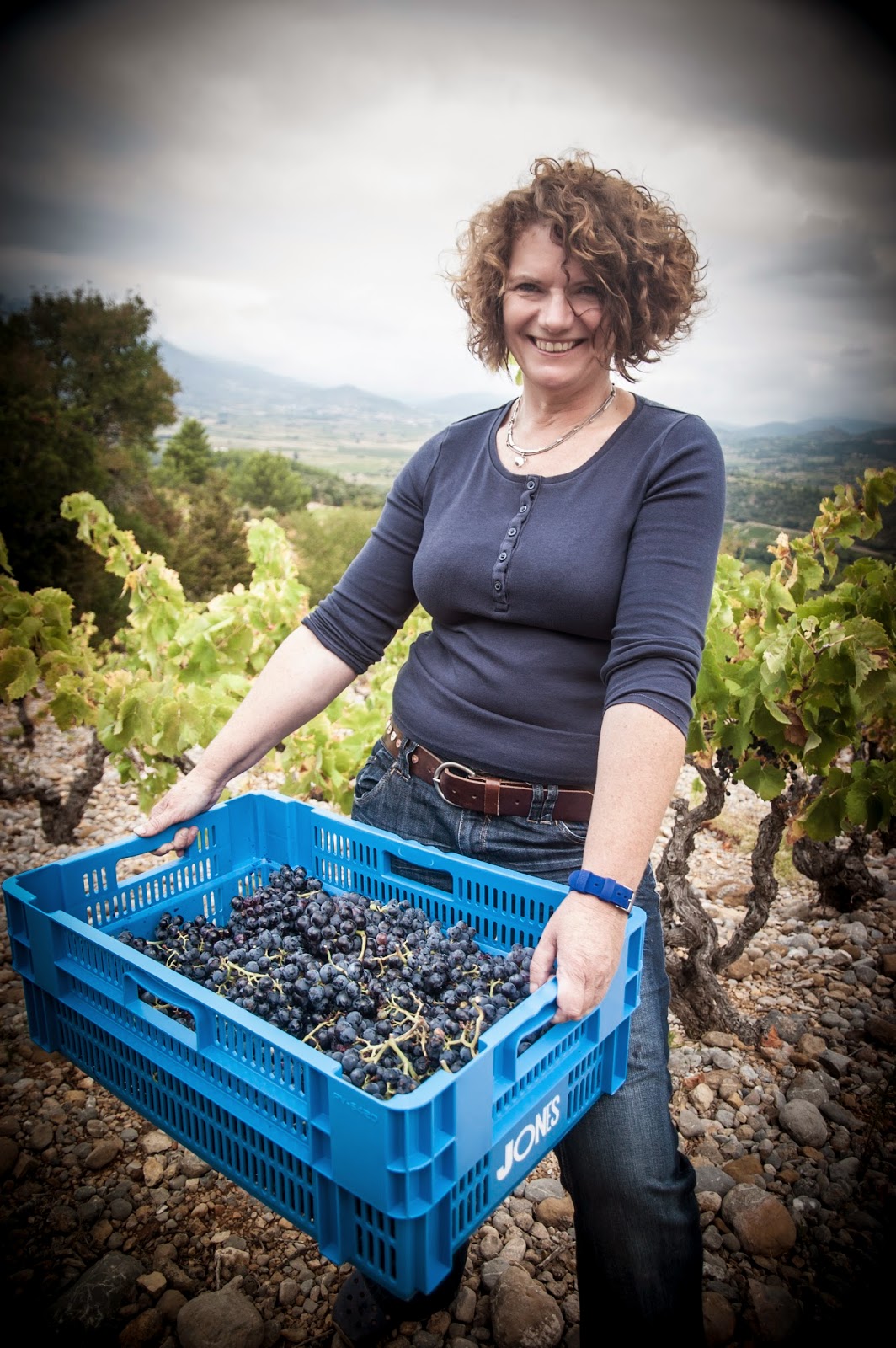 Katie moved to France just over 20 years ago and spent most of that time helping to market and sell the wines of the Mont Tauch co-operative. In 2009 she made the leap and bought her first parcel of vines in Maury just over the “border” in Languedoc’s neighbour, Roussillon. A small and isolated plot of old vines with blocks of different grape varieties, as Katie says “The very things that make my small vineyard unattractive to the big growers make it a paradise for me.”

Although size-wise these two producers may be poles apart, they do share some common ground. The vast majority of the wine they make goes to export markets – 80% for Foncalieu, 98% for Domaine Jones.  They are also, in their different ways, part of the process of helping the Languedoc to climb out of the cheap wine ghetto.

Foncalieu and Domaine Jones wines in the UK

Katie Jones’ wines are available through Majestic, Naked Wines and The Wine Society – though, as they are necessarily made in rather small quantities, they are not all always in stock. Some of Katie’s most exciting wines are her whites and unfortunately, due to an act of vandalism last year, when the vats were deliberately emptied, all of her 2012 white wine production was lost.

Domaine Jones Côtes Catalanes Grenache 2012 - £11.95 from The Wine Society
At its most basic, Grenache makes wines that are fairly simple, combining strawberry fruit and white pepper. However, old vines such as these bring greater concentration and full-bodied, ink-tinged fruit. 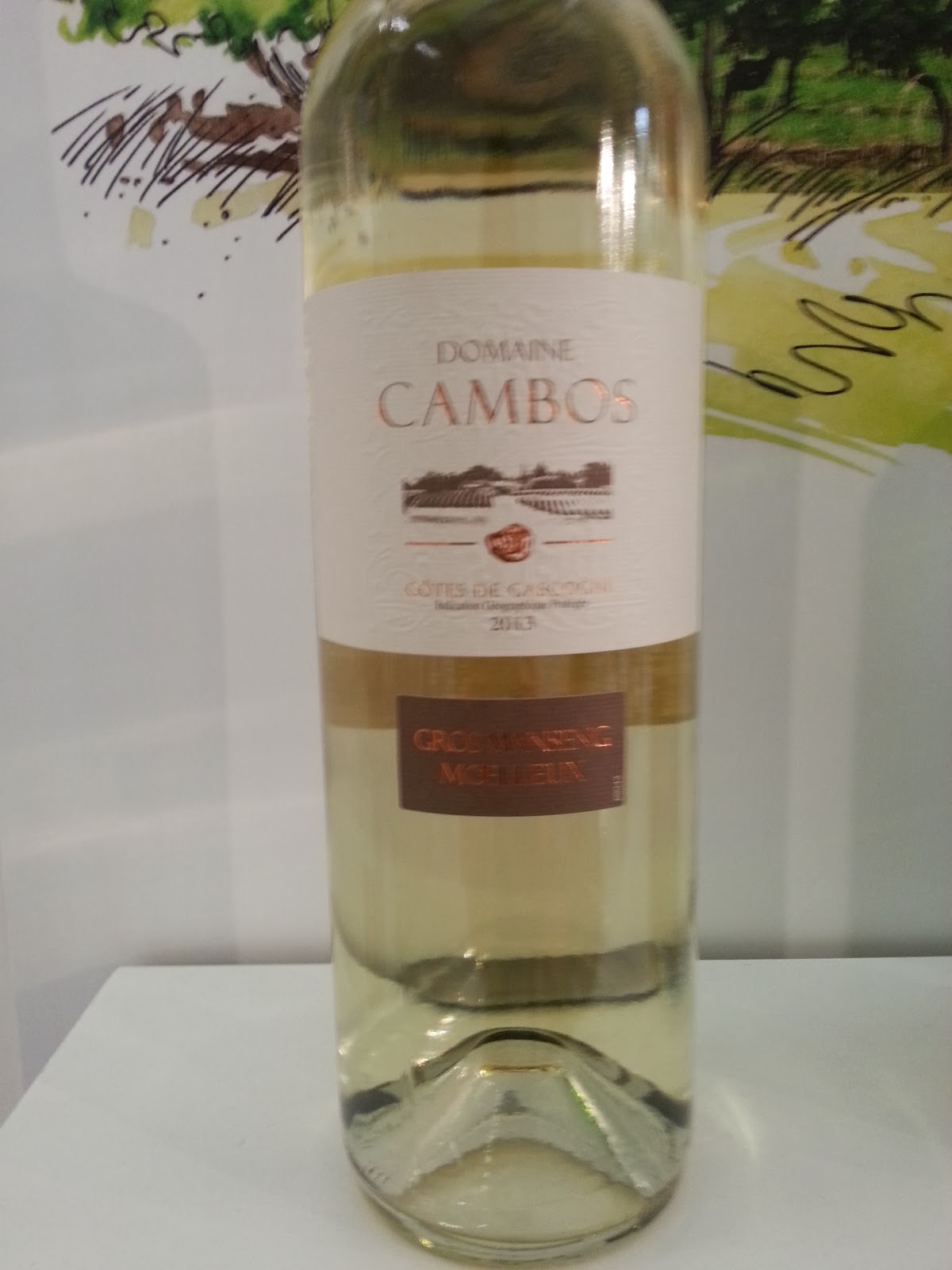 Domaine Cambos Gros Manseng 2012 – on offer at Hennings Wine Merchants for £5.50
From the Gascony end of Foncalieu’s production, Gros Manseng is a white grape incapable of making boring wines – fresh with a distinct grapefruit tang and a surprising amount of weight and persistence on the palate (and ony 11% alcohol).

Le Versant Viognier 2012 - £8.50 from Hennings Wine Merchants and other 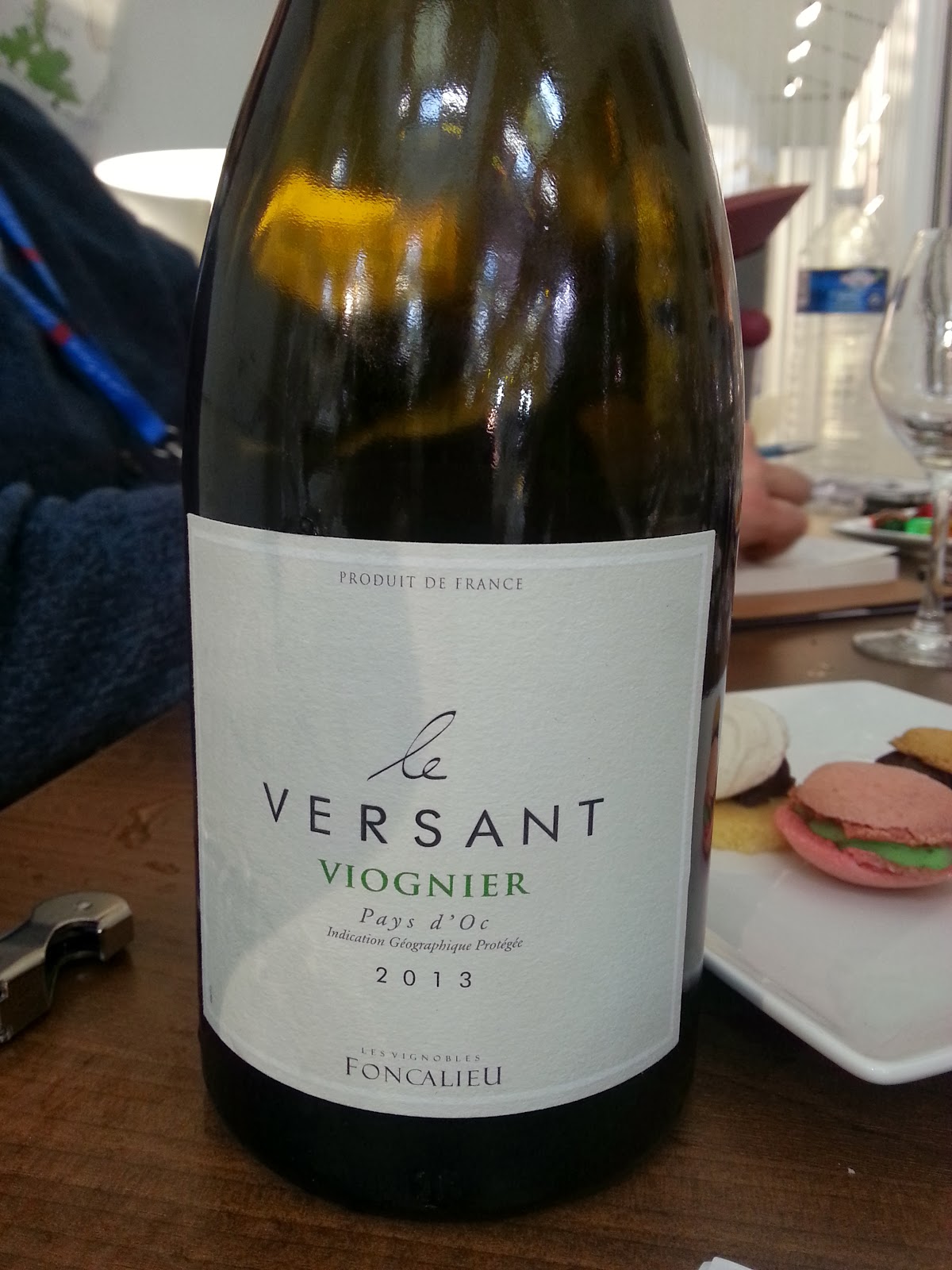 Le Versant is Foncalieu’s core range of varietal wines, which you might come across on many a restaurant wine list. This Viognier is their top seller in the range and supplies plenty of the variety’s typical stone fruit and honeysuckle aromas, with a more savoury feel on the palate.  Also look out for Le Versant Syrah, Merlot and Cabernet Sauvignon at around the same price.
at 01:56 2 comments:

If I ask you what comes to mind when I say Chilean wine, what pops into your head? I am betting that excitement, experimentation and risk-taking are not at the top of the list. Perhaps you are thinking more along the lines of reliability, good value and consistency?

If ever I find myself a contestant on Pointless and the category of Chilean wine comes up, I reckon I’ve got that round pretty well sewn up. Never mind that neither occurrence is ever likely to happen.

But back to the matter in hand. Given my hypothesis viz a viz wine from Chile, what would drive an established producer, with a proven track record of critical and commercial success for their international style wines (for want of a better description) to turn their back on all that? What happened to “if it ain’t broke, don’t fix it”? Marcelo Retamal, Iron Maiden-loving winemaker at Chile’s De Martino winery for the past eighteen years, puts it simply: he didn’t enjoy drinking the wines that he was making. They represented what he now calls “the Dark Side”.

He pinpoints 1998 as a year of change, when the arrival of international winemaking consultants in Chile and demand from international buyers led to a very different approach to winemaking from what had gone before. The trend for soft, sleek and powerful wines meant that grapes were picked later (up to two months later than previously) in order to get super-ripe flavours, which in turn led to the need for routine acidification to correct the low acid levels in such ripe grapes; 100% new oak barrels and selected yeasts became the norm in the winery.

Devotees of this column, should there be any of you, might recall that I wrote about De Martino’s wines back in 2011 when Marcelo Retamal and Sebastian de Martino visited the UK and told the world about their plans for the future. Their 2010 vintages which I sampled then contained tantalising hints of what was to come, but now they have come back to show us the full picture with their 2011 and later wines.

To illustrate his point, Marcelo led a vertical tasting of a Carmenère from De Martino’s Alto de Piedras vineyard in the Maipo Valley.

The 2005 epitomised what Marcelo calls “the Dark Side”: there is plenty of oak and ripe, slightly pruney fruit, but also a swingeing tannic structure, jarring acidity and a lingering flavour of alcohol (which stands at 14.8%). It felt like a wine at war with itself.

In 2010 Marcelo, in partnership with Sebastiàn de Martino, decided that he had had enough of making what he now calls “bad wine”. That meant no more new oak barrels, earlier picking dates, no acidification, use of natural yeasts (that is naturally occurring yeasts which are present all around us and provide, for example, the lift in sourdough bread) and lower alcohol.

The 2011 Alto de Piedras wine illustrated the new thinking. It is light on its feet, with lively fruit and fresh acidity. Alcohol is down to 13.3% and acidity is naturally higher, thanks to earlier picking (20 April compared with 10 May in 2005, some 20 days earlier). The wine is aged in 5,000 litre foudres (huge wooden barrels) instead of new oak barrels holding 225 litres, so the effect of oak on the flavour is minimal. It demonstrates the move towards a more authentic, natural and gastronomic style of wine.

De Martino’s other project is a number of wines fermented and aged in old giant clay amphorae (known as Viejas Tinajas in Chile) from vines grown in the southerly Itata Valley. It may sound wilfully eccentric to use such antique techniques, which would not have looked out of place in ancient Rome, but amphorae (and their modern equivalent, cement “eggs”) are actually becoming, if not commonplace, at least not freakish, in wineries around the world.

Itata is home to some of Chile’s oldest, dry farmed bush vines and the De Martino Viejas Tinajas range comprises a dry white made from Muscat and two reds, one a 100% Cinsault and the other a Carignan/Cinsault blend. Production is not high – only 6,000 bottles of the Cinsault are made – but it could mark the arrival of user friendly Chilean natural wine, with its soft structure and lifted sweet/savoury flavours.

Gallardia Cinsault Rosé 2013 - £8.95 from The Wine Society, £11.65 from Caves de Pyrène of Guildford
From Itata, but not part of the Viejas Tinajas project, this is a more mainstream, but effortlessly enjoyable wine. It looks and tastes like a classic Provence rosé, with fresh, marine flavours and a gentle finish.

Gallardia Muscat 2012 - £11.65 from Caves de Pyrène
Muscat can be a bit of an in your face variety, with its intensely grapey aromas, which can then seem out of synch with a dry palate. Here, the aromatics are more restrained, with hints of candied fruit. It tastes beautifully fresh and would be a real crowd pleaser (especially if you don’t let on that it’s Muscat, to avoid people like me thinking they won’t like it).

La Aguada Old Vines Field Blend 2011 - £22 from Caves de Pyrène (The Wine Society currently stocks the 2008 for £14.95)
Planting an entire vineyard with a single grape variety is actually quite new technology in many parts of the wine world. It was once common practice to plant a range of varieties together (without necessarily even knowing what those varieties were), though it’s now increasingly rare. This vineyard is predominantly Carignan, usually a despised variety, thought to bring nothing more than colour, alcohol and rusticity to a wine. Old, dry-farmed vines such as this, though, can make wines of real character and depth – and the smattering of Cinsault and Malbec help to give lift and perfume.
at 06:41 No comments: