Beaujolais - back to the Eighties?

Margaret Thatcher in the news, David Bowie in the charts, Beaujolais in my glass – is this really 2013, or have I travelled back in time to 1983?

Back then it was Beaujolais Nouveau that had us all aflutter:  a wine bottled and released almost as soon as it had finished fermenting.  Its charms are all about immediate drinking, with its cherryade fruit, mere suggestion of tannin and sometimes more than a hint of Hubba Bubba.

At least part of its success was due to the publicity raised by the race that developed around this wine that was released annually on the third Thursday of November.  Trains, planes (or helicopters) and automobiles were involved in bringing Beaujolais to British drinkers post haste from the vineyards, brightening up an otherwise dull time of year and providing a perfect excuse for a liquid lunch.

Beaujolais Nouveau is still made, although in much smaller quantities than its 1980s heyday, when it accounted for around 60% of all Beaujolais produced.  The Nouveau is designed to be drunk over weeks, rather than months or years – though the distinction between it and regular wines is really not that great.

Wine geeks (me included) will want to know that the Nouveau style is achieved by the use of carbonic maceration (or in many cases, actually semi-carbonic maceration – I did say this bit was for geeks).  In classic red wine making, the grapes will first be crushed (though not pressed) to release their juice and to allow the skins to contribute colour and tannin during the subsequent fermentation.

Carbonic maceration, in essence, involves leaving the berries whole in the fermentation vats.  Yeasts on the grape skins will start to feed on the sweet juice within the berries, leading to a gentle fermentation which results in a wine with plenty of colour, low tannins and “so bright you gotta wear shades” fruit.  However, alongside the fruit can be some less welcome aromas of banana liqueur, even bubblegum.

The Beaujolais quality ladder
If you want to leave the ephemeral charms of Beaujolais Nouveau behind, it pays to understand a bit about how the region’s wines are classified.

In some ways Beaujolais is refreshingly straightforward – the reds are all made from the Gamay grape (or Gamay Noir à jus blanc to give it its full name) which seems to have a natural affinity with the region’s granitic soils.  Large-ish grapes with thin skins make for fruity, fleshy wines which are relatively light in colour.  The tiny proportion of white Beaujolais (yes, I’m not teasing, it does exist) is made from Chardonnay.

Knowing how to interpret Beaujolais wine labels should give you a good idea of what you’ll find in the bottle.  At the most basic level is straight Beaujolais, made anywhere within the region and accounting for around half of all production.  A step up from there is Beaujolais-Villages, made from generally hillier sites which have been judged to produce better quality wines.

At the top of the tree are the ten Beaujolais “crus” – essentially villages whose wines have been judged of sufficient quality that they can simply put their names on the label.  If you’re planning a wine-themed pub quiz any time soon, naming all ten is an exquisite torture akin to recalling the names of the Seven Dwarfs.  For the record they are:  Brouilly, Côte de Brouilly, Chiroubles, Chénas, Moulin à Vent, Saint Amour, Fleurie, Regnié, Juliénas and Morgon.  In the interest of journalistic integrity, I hereby confess that I could only get to eight without recourse to a reference book. 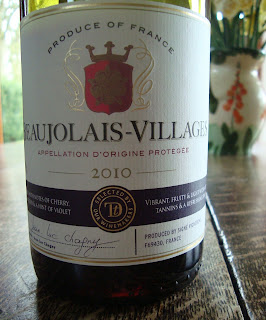 Sainsbury’s Taste the Difference Beaujolais-Villages 2010 - £6.99
If you ever set foot in a wine bar in Paris or Lyons, it’s likely that the wine you’ll be offered to accompany your plate of charcuterie is from Beaujolais.  The region’s wines are the perfect foil to salami, ham, saucisson, pâté and the like, its lively fruit and juicy acidity cutting through the fattiness of the meat.  This one is a great example of decently-priced, good quality Beaujolais with attractive strawberry fruit. 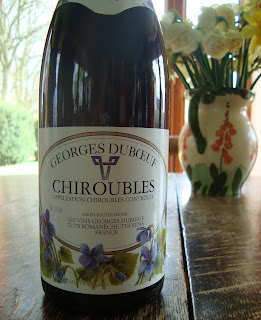 If there is one name synonymous with the region it is that of Georges Duboeuf, the man behind the flower Beaujolais labels and indefatigable promoter of the region.  This wine is a delight for Spring drinking:  vibrant, deeply coloured, with floral and loganberry-scented fruit, soft tannins and wonderful light freshness.  Chiroubles is renowned for producing the lightest wines of all the Beaujolais crus and this one is a charmer.

Henry Fessy Brouilly 2011 - £11.99 from Waitrose
Classic Beaujolais is definitively light bodied, and this lightness can lead to it being denigrated as lacking seriousness – an unfair charge that is never levelled at its northern neighbour, Burgundy, and its decidedly light Pinot Noir.  If you’d like to see what a serious lightweight wine tastes like, then grab a bottle of this Brouilly, from the most southerly of the ten crus.  The low temperature fermentation has retained the freshness of the lively red fruit but also managed to provide enough depth of flavour to make a perfect match with spring lamb.
at 01:48 No comments:

Getting fresh at the Real Wine Fair

Don’t you just love it when the wine trade gets a bee in its bonnet about what we should call wines?

Guildford’s own Caves de Pyrène are the leading lights in a new wine movement, which has recently held its second annual tasting of what they are calling “real wine”.  Doug Wregg, wine trade poet-philosopher and sometime Sales and Marketing Director (a man further removed from the image of anyone with that job title you could not hope to find) for Caves de Pyrène is the brains behind the operation.

What is a real wine?  Are some of the things we drink, foolishly imagining them to be wine just because that’s what it says on the label, in fact no such thing?  Rest easy, wine drinkers, of course it’s all real wine – just not “real wine”.

Now I should provide a pithy and concise definition of what constitutes “real wine”.  But of course such a thing doesn’t exist.  These wines tend to be made with minimum intervention in both the vineyard and winery; many are organic and/or biodynamic; usually they are made by small-scale operations; a good number of them would probably also come under the banner of natural wines (another rather nebulous and hard-to-pin-down category).  The winemakers share an interest in producing wines that speak of their origins and which express the growing conditions of the vintage.  The real or natural wine movement is somewhat akin to the slow food movement.

If someone put a gun to my head and asked me to sum up such wines in a single word, I’d say “What the h*** are you doing with a gun, for God’s sake, it’s only wine.” as I ran from the room.  If I was asked nicely (without the gun) then “authentic” might be a decent stab at it.

Here are some of my own highlights from the second annual Real Wine Fair, held last month in London:

I Vigneri Salvo Foti – Vinujancu Bianco 2011 - £23.16 from Caves de Pyrène
One of the joys of exploring Italian wines is constantly discovering new grape varieties, even as a seasoned grape-spotter.  This Sicilian white is a blend of Minnella (the new one to me, native not just to Sicily but to the Etna region specifically), Grecanico (aka Garganega, another Italian native and most famously associated with Soave) and Riesling (a long way from its German origins).

As you might imagine in the Etna region, the soils that the vines grow in are volcanic – indeed some resemble black granulated pumice, rather than anything you might consider trying to use as a growing medium.  The result is intensely flavoured, characterful wines, helped along by the high altitude (1200m for this wine) and ancient vines.  Salvo adds no sulphur to the wines, but there is no hint of odd or off flavours, just aromas of honey and honeycomb, leading onto a dry, grippy and zippy palate. 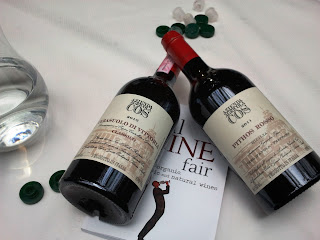 COS, Giusto Occhipinti – Cerasuolo di Vittoria 2010 - £16.80 from Caves de Pyrène
Still in Sicily, COS produce a range of wines from indigenous varieties.  Cerasuolo di Vittoria is the island’s only DOCG (ostensible top of the quality tree for Italian wines) and is a blend of two native varieties:  Nero d’Avola and Frappato.

If you were to imagine the style of red wine that comes from such an intensely Mediterranean setting, then I would wager it would be confounded by what you would find here:  nothing is overdone, all is lightness and elegance.  The fruit is delicate, cherryish and fresh, with no oak flavours to tone it down – the wine is fermented in cement tank and aged in large old oak “foudres” (essentially giant barrels).
Bodegas Bernabe Navarro – La Amistad 2011 - £8.88 from Caves de Pyrène
Spain has been rather slow to hop aboard the real wine train, but Alicante winemaker Damien Perez is making enough leftfield wines to make up for it.  This one is made from local variety Rojal and is fermented and aged in amphorae, or tinajas in Spanish.  We usually associate amphorae with archeological digs, as these vessels were used in the ancient world to transport olive oil and wine, but they have begun to find favour again in the natural/real wine movement.

Amistad is a light red wine that you could serve chilled in summer (should it ever arrive) to appreciate its lively, fresh sour cherry fruit. 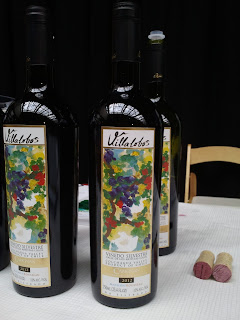 “The Wild Vineyard” Villalobos Carignan Reserva 2012 - £15.90 from Caves de Pyrène
Just to show that the New World is also getting the hang of this real wine thing, I’ve included this Chilean, new to the Caves portfolio.  Carignan is one of those lowly varieties that gets labelled “workhorse” if it’s lucky.  It was enthusiastically taken up by growers in France’s Languedoc post 2nd World War, valued for its colour, alcohol and high yields.  This aim-low strategy allied to reliance on industrial viticultural techniques was never going to be a recipe for quality, and Carignan’s reputation suffered as a result.

Chile, however, is home to some wonderful old vine Carignan – these were planted in the 1940s and 50s, which makes them positively prehistoric in the context of Chilean viticulture.  Essentially organic from the word go, the vines have never been subjected to any kind of treatment and have been allowed to grow wild (hence the vineyard name).

Freshness is a hallmark of all the wines that I enjoyed at the fair and this one is no exception, with masses of crunchy blueberry fruit - though I concede blueberries are not a crunchy fruit, it’s more a combination of crunch and blueberry that I’m trying to convey.  There is plenty of body and substance, but also elegance.
If you fancy checking out more of these kinds of wine, you can pay a visit to RAW, which bills itself as an artisan wine fair and will take place in London on 19/20 May.  The Real Wine Fair will be back again in 2014.
at 07:15 No comments: