It’s a media mantra at this time of year – a diet and exercise regime to create a whole new person out of that lump of lard that has spent the best part of two weeks either parked in front of the TV or eating – or both at the same time.

Yet just a few short weeks ago those same newspapers and magazines were bombarding us with images of decadent desserts and indulgent Christmas treats to gorge ourselves on over the festive period. This invitation to fatten ourselves up like the livers of foie gras geese followed close on the heels of exhortations to get ourselves thin enough to sparkle in our Christmas party gear.

But now the pendulum has swung back again and we are made to feel guilty for giving into the temptation of all those high-fat treats washed down with a glass or three of wine. Now the talk is all about denial and detox so that we can release that fitter, svelter, younger version of ourselves that we have been doing our best to disguise in a fat suit in recent weeks. Before we know it we’ll be measuring the circumference of our thighs with a fatuous smile on our faces as the weight drops off.

Gawd help us, are we really such mindless hamsters on a wheel, that we respond automatically to whatever stimulus is put in front of us?

And am I really going to peddle wine, those cocktails of empty calories and evil alcohol, at this time of year? Hell yes, January is bad enough without depriving yourself of the occasional glass of something.

The Drinkaware website is full of useful, if rather downbeat, information on alcohol and its effects, including the number of calories contained in a glass of wine. Their statistics are based on a 250ml glass of wine, ie a third of a bottle. This amount of wine containing 13% alcohol provides 200 calories and constitutes 3.3 units of alcohol. And no matter how fruity the wine, it does nothing towards your five a day.

I would like to make a couple of modest suggestions based on this information. First of all, 250ml is a lot of wine to have in a glass. You might think, just one glass is fine, but at 3.3 units of alcohol that is already in excess of the recommended drinking guidelines for a woman (which is no more than 2-3 units a day). Whether those guidelines have any scientific validity and whether there is any such thing as a “safe” level of alcohol intake are hotly debated questions  - which I do not intend to debate. 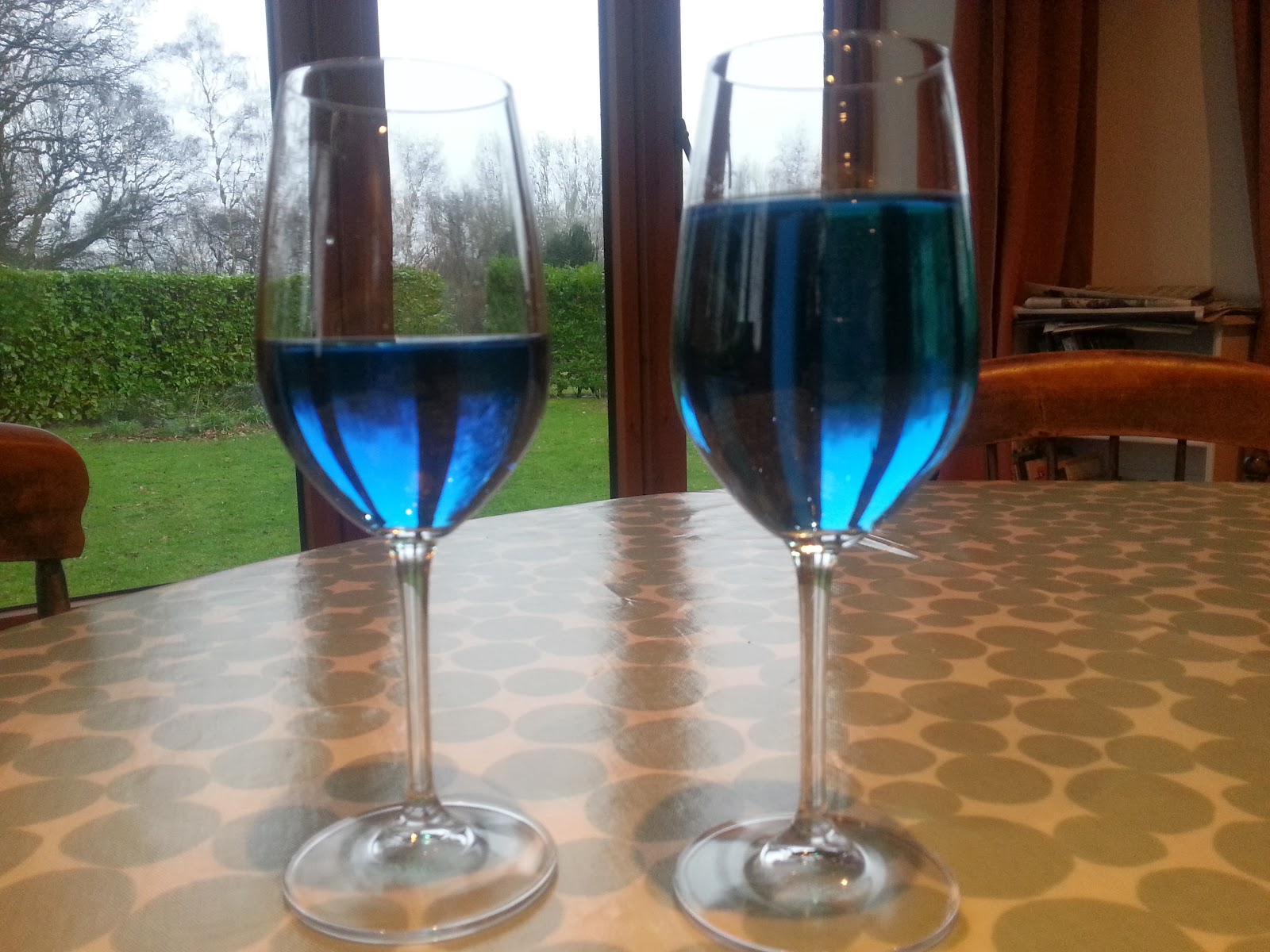 Here is a small illustration of what 125ml and 250ml look like in the glasses I generally drink from at home. What immediately strikes me (other than the fact that my wine has gone blue), is that the bigger measure doesn’t look anything like twice the amount in the other glass.

If you tend to pour something closer to the glass on the right, it might be a good idea to measure 125ml in a measuring jug and see what that looks like in your own wine glasses, so that you can get in to the habit of smaller measures. You can still have your glass of wine, but you’re not blowing more than 3 units in one go – and your calorie intake is kept down too. A 125ml glass of Champagne (almost always 12% alcohol) constitutes a single unit of alcohol and a more reasonable 86 calories (the equivalent of a chocolate digestive biscuit the helpful bods at Drinkaware inform me).

I’m a full fat milk kinda person and instinctively shrink from anything that is a light or low fat version of the real thing. I would always rather choose a small amount of what I really like, rather than lots of something that doesn’t quite hit the spot. So if I were to be counting the calories in my wine, that 125ml of Champagne looks good to me.

However, there are also a number of wines who advertise their lower alcohol and lower than average calories. Generally they are made from grapes are picked earlier than usual, so sugar levels start out  lower than in fully ripe grapes. Many of the finished wines also have quite a bit of residual sugar, ie not added, but sugar that was already present in the grape juice and which remains after fermentation.

Bella Sauvignon Blanc 2011 - £9.99 from Taurus Wines (Bramley)
A lower (9.5%) alcohol version of one of this country’s favourite wine styles – Marlborough Sauvignon Blanc. I have actually tasted this wine and it slips down easily with bags of fruit, juicy acidity and is definitely off-dry. All fair enough, but don’t go looking for complexity with this kind of wine. 90 calories for 148mls.

Jacob’s Creek Cool Harvest – RRP £8
Jacob’s Creek have a range of wines including a Sauvignon Blanc and a Shiraz rosé with alcohol levels of 9.5-10.5% and clocking in at 100 calories per 120mls.

If your tastes are more on the bone dry side, then make friends with Australian Semillon. Most famously grown in the Hunter Valley, Semillon makes for intensely limey, crisp and bone dry wines with modest alcohol levels.  Young wines are incredibly fresh palate-sharpeners, but Semillon also ages beautifully, developing toasty, lime marmalade flavours with more time in bottle. Try Sainsbury’s Taste the Difference Hunter Valley Aged Semillon as an example, which has 10.2% alcohol and 114 calories per 125ml glass.

And don’t worry if counting calories and units is getting you down, the media pendulum will soon swing back again as we head towards Valentine’s Day, accompanied as it is by a tsunami of chocolate and pink fizz.  Come April and Easter means more chocolate…. closely followed by the anticipation of summer and a raft of regimes to get your body bikini-ready. Back to our wheels, hamsters.
at 05:30 No comments:

What fresh hell is this?

The party’s over, the fizz is flat, the turkey has finally been seen off and the decorations are looking more shabby than chic. Here we are again in January, the cruellest month, its icy hand beckoning us into the dark nights and grey days of deepest winter. Even if you’ve hardly touched a drop over the festive season, January can feel like one long hangover – from too much food, too much drink, too much money spent.

Dorothy Parker was a founding member of the Algonquin Round Table, a group of hard-drinking, wise-cracking writers and wits who met for lunch and cocktails at The Algonquin Hotel in Manhattan in the 1920s. Her riotous lifestyle meant that her experience of hangovers was deep and long-lasting and she dubbed the after-effects of drink as “the rams” and, with typically concise wit declared that “A hangover is the wrath of grapes.”

Even as we undergo the exquisite torture of entirely self-inflicted suffering that is the hangover, we can at least console ourselves with the descriptions of the hungover state from some of our foremost literary talents.

PG Wodehouse’s character Bertie Wooster was no stranger to over-indulgence and was lucky that his faithful Jeeves was on hand with his legendary “corpse reviver” (recipe uncertain, but see the Savoy’s version below) if he were “suffering from magnums”. Wodehouse also recognised that there is more than one type of hangover and classified them thus: The Broken Compass, The Sewing Machine, The Comet, The Atomic, the Cement Mixer and the Gremlin Boogie. He did not go on to specify the symptoms of each; that is left to our own imagination (and experience).

Kingsley Amis wrote perhaps the most deliciously definitive description of the morning after the night before in his novel, Lucky Jim.

“Dixon was alive again. Consciousness was upon him before he could get out of the way; not for him the slow, gracious wandering from the halls of sleep, but a summary, forcible ejection. He lay sprawled, too wicked to move, spewed up like a broken spider-crab on the tarry shingle of the morning. The light did him harm, but not as much as looking at things did; he resolved, having done it once, never to move his eyeballs again. A dusty thudding in his head made the scene before him beat like a pulse. His mouth had been used as a latrine by some small creature of the night, and then as its mausoleum. During the night, too, he’d somehow been on a cross-country run and then been expertly beaten up by secret police. He felt bad.”

Is there a cure for such a condition? I recently had cause to consult my copy of Booth’s Handbook of Cocktails & Mixed Drinks, published in 1966 and written by John Doxat, who sounds like he would have made an entertaining drinking companion. Unsurprisingly, he writes with some authority on the after-effects of a night in the company of those he calls the compulsively convivial: “It is only the very wise who have never suffered, even mildly, from that matitutinal malaise or alcoholic remorse to which the ugly and descriptive word Hangover applies.”

He goes on to offer a number of drinks said to have some efficacy in remedying the condition, including the classic Prairie Oyster:

Pour over the yolk of an egg and drink without breaking the yolk.

Never mind not breaking the yolk, I should have thought drinking without gagging would be the most tricky part.

He also gives the recipe for the Savoy Hotel’s version of the Corpse Reviver:

Shake with ice and strain into a cocktail-glass.

This is clearly from the “kill or cure” school of thought. Whether the corpse in question was grateful for being revived by this method, history does not record.

Along similar lines is the Heart Starter:

Perhaps the kindest morning after the night before treatment is a good old-fashioned Bloody Mary. Many of us have our own favourite recipes, but here is John Doxat’s:

Stir together in tall glass, with a little cracked ice.

It at least has the benefit of providing one of your five a day, if nothing else.

Whether any of these drinks works better than a lie-in with some Ibuprofen is very much in the eye of the beholder. As Robert Benchley, contemporary of Dorothy Parker and a fellow-member of the Algonquin Round Table, put it: “The only cure for a real hangover is death.” Gulp.
at 06:39 No comments: