You don’t know how many years I’ve waited to make that feeble pun in print. The Te Mata in question is New Zealand’s oldest family-owned winery, where vines were first planted at their Havelock Hills vineyard in Hawkes Bay back in 1892.

In recent years, the New Zealand wine regions making waves in the export market have been elsewhere: Marlborough, home to the oceans of Sauvignon Blanc that we do our best to drink dry every year; and  Central Otago and Martinborough for their Pinot Noir. Hawkes Bay has taken something of a back seat, despite having a long history of winemaking dating back to the mid-19th century.

While we tend to think of New Zealand as pretty much a white wine producer (all that Sauvignon Blanc), Hawkes Bay has major plantings of Syrah, Merlot and other red varieties. Sauvignon Blanc is still the single most planted variety, followed by Chardonnay, but as a region it stands out as one of the few parts of the country able to successfully ripen the warmer climate Bordeaux varieties and Syrah.

The climate of Hawkes Bay is broadly similar to Bordeaux, ie warm summers and a strong maritime influence. Hawkes Bay just edges it on annual average hours of sunshine (2188 vs 2052) and has slightly less rainfall (803mm average vs 900mm in Bordeaux). Compare this to the averages on the south coast of England, usually the sunniest part of the UK, of around 1750 hours of sunshine a year and 900-950mm of annual rainfall. I can certainly see the attraction of Hawkes Bay from a sun-lover’s point of view.

A key part of Hawke’s Bay’s renown is down to producers like Te Mata, with their long time reputation for fine reds and compelling white wines.

Te Mata wines in the UK

Cape Crest Sauvignon Blanc – Majestic list the 2012 vintage for £23, The Wine Society for £17.50; thedrinkshop.com has the 2010 for £18.21, but you must buy 6 bottles
A style first made by Te Mata in the 1980s, this confounds the typical Kiwi Sauvignon model, which is fermented in stainless steel and designed for early drinking. Looking to Bordeaux (again) for inspiration, they barrel ferment in 25-30% new oak and add Semillon and Sauvignon Gris to the blend. Ignore the usual advice for New World Sauvignon Blanc, which is DYA (drink youngest available) – this is a wine that really gets into its stride after a few years in bottle.

The mix of varieties and the barrel fermentation give a more interesting texture and range of flavours than you would usually find in a Kiwi Sauvignon. The 2012 is a youthful, linear wine with fennel and angelica aromas and a powerful, mineral finish. The 2010 has gunflint aromas overlaying tropical fruit. The palate has some viscosity and a touch of grapefruit bitterness – this would be my choice for drinking now.

Elston Chardonnay – Berry Bros have the 2012 for £28.95, New Zealand House of Wine for £21.99 and various independent merchants at prices in between
We’re more used to Chardonnay being given the barrel fermentation and ageing treatment, in classic white Burgundy mode. While New World makers of this style of Chardonnay are probably heartily sick of having their wines compared to Burgundy, it’s hard to look beyond it when looking for a benchmark for oaked Chardonnay.

I especially love the 2013 vintage, which doesn’t appear to have hit the shelves here yet. It combines Chablis-style minerality and lively acidity with a floral note and manages to combine delicacy with bags of flavour. While you’re waiting for this to arrive, you’ll just have to try a bottle of the linear and intense 2012.

Coleraine 2010 - £49.95 from Berry Bros, £39.64 from thedrinkshop.com, £46.29 from Flagship Wines. Older vintages available from various independents
In New Zealand terms, Coleraine is a positively antediluvian wine, dating back to 1982. It’s the jewel in the crown of Te Mata’s wines and arguably one of New Zealand’s finest. If you have expensive tastes in claret, this could be a relatively cheap option.

It’s a classic Bordeaux blend of Cabernet Sauvignon, Merlot and Cabernet Franc and it has classic Bordeaux proportions too: medium, not full, bodied and with a sense of power reined in; dark cassis fruit with cassia and clove spice along with juicy acidity are there now. You could certainly enjoy it now, but wouldn’t necessarily see the point of it for a few years yet.

If you’d like that Bordeaux blend in something to enjoy rather sooner (and more cheaply!), then search out a bottle of Te Mata’s Awatea. There’s some lovely summer pudding style fruit (and acidity) here and prices for the 2009 vintage start at around £21 from various independent merchants.


At the positively bargain end of things, I hugely enjoyed this Gamay (the Beaujolais grape) with its crunchy plum and raspberry fruit. It had the acidity and fruit intensity to stand up to a tomato and red pepper risotto and, like Beaujolais, is extra refreshing served lightly chilled.
at 10:16 No comments:

I am constantly reminded of how little I really know about grapes and wine. Olivier Bourdet-Pees, Managing Director of dynamic Saint Mont-based Plaimont Producteurs gave a talk in London recently on (re)discovering some of the rarest grapes in Southwest France. 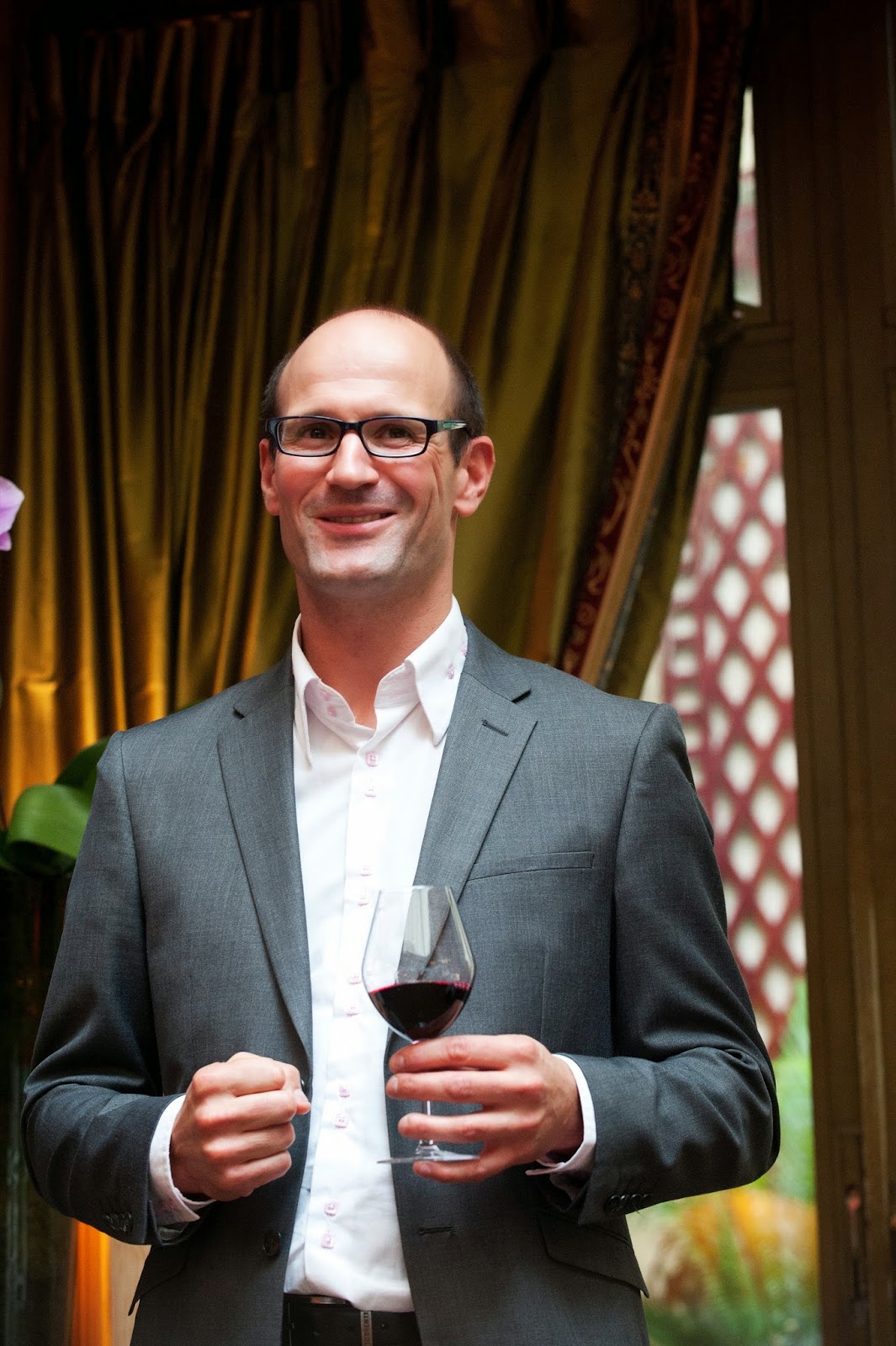 Some of you may already be familiar with some of this part of France’s horde of unique indigenous varieties, including the characterful white Mansengs (Gros and Petit), Petit Courbu and Arrufiac; the fiercely tannic and ageworthy Tannat and the lighter, fruity Pinenc ( also known as Fer Servadou, Braucol and Mansois). These are the ones we know about – but are there many others waiting to be discovered?

In the 1970s and 80s, winemaker and oenologist André Dubosc began to work actively to reinvigorate the flagging fortunes of Saint Mont’s growers, who had previously provided grapes for distillation as Armagnac, by urging them to focus on the production of table wines instead. As part of this work he began noticing individual vines which seemed unlike their neighbours. In order to preserve this potentially interesting or valuable plant material, Dubosc would even go so far as to pay growers to maintain these vines, rather than uprooting them to replace them with known varieties.
The story moves on to 2002, when a “conservatory” of these potentially new varieties was established, containing 20 vines each of 39 distinct varieties, enough to make just 3-4 bottles of wine. By 2007, the science of DNA identification was brought to bear in identifying varieties, or in determining how they are related to existing varieties. Science has its limits, though, and 12 of the 39 are still unknown, in that they share no relationship with any known variety anywhere in the world. This means that this small corner of the winemaking world is potentially the home of 12 entirely new varieties – and who knows how many more lurking unnoticed in the vines?

Olivier told us that a number of these varieties were female, which had the audience rather non-plussed: we’ve all learnt that grape vines, Vitis vinifera, are self-fertile, or hermaphrodite. And yet it seems that it ain’t necessarily so. Oliver quoted the example of the Kiwi fruit: as many disappointed would-be growers of it know, it exists in both male and female form. Only the female plants are capable of bearing fruit, but they require a nearby male kiwi plant to fertilise them.

The same used to be true of grape varieties too, but we humans have bred out that characteristic, with the result that all the varieties that we come across in commercial vineyards are indeed self-fertile. Olivier predicts that within a hundred years we will have forgotten that the kiwi vine ever existed in male and female forms, as commercial breeders will have developed self-fertile vines and the old male/female varieties will have effectively become extinct. 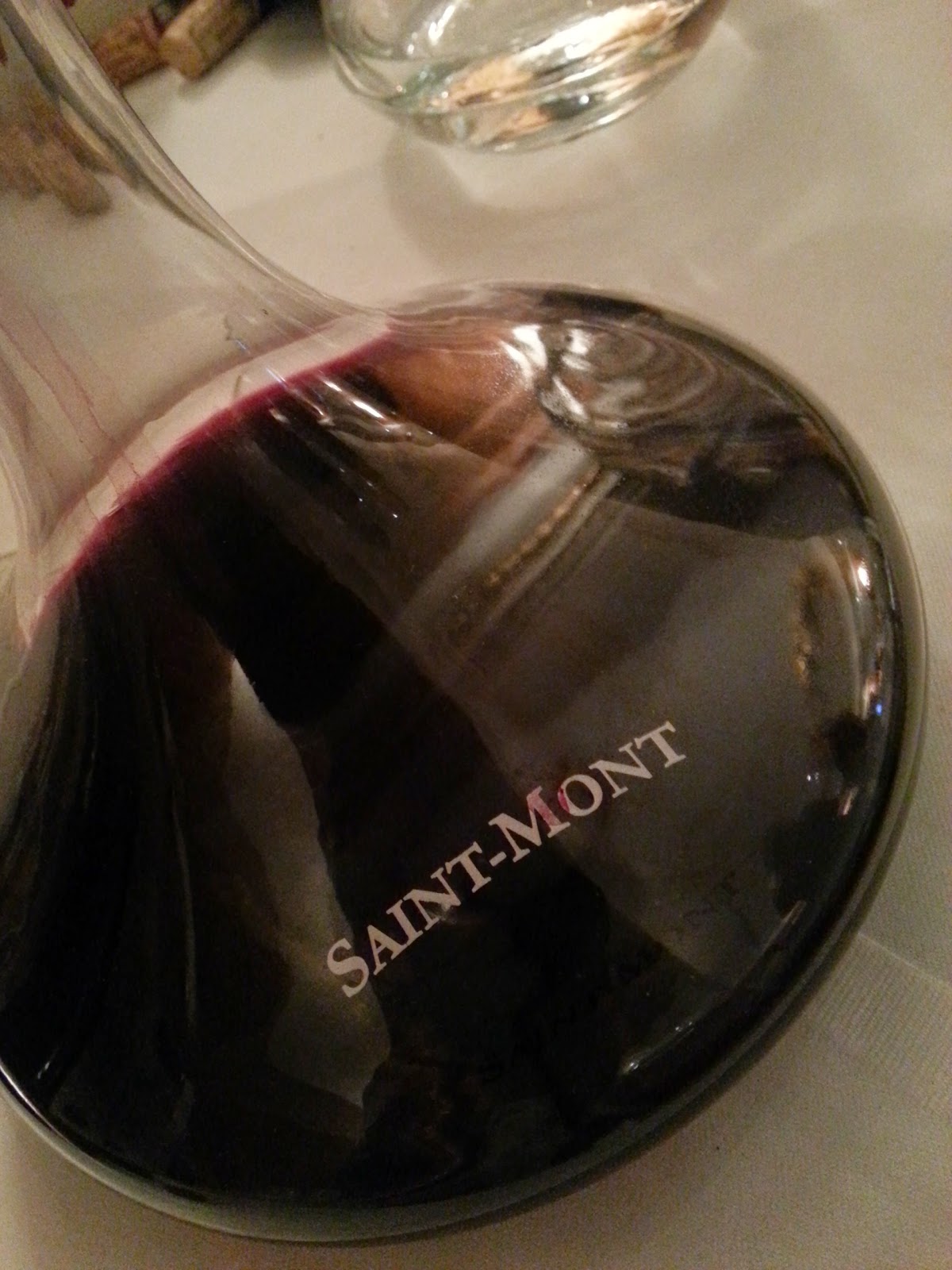 After that food for thought, Olivier then led us through a tasting of some of the wines made from the potentially new varieties.

Pedebernade No 5 – there is no official name for these vines as yet, so they are named after the owners of the vineyards in which they were found. This is a red variety with interesting marzipan and cherry aromas, brisk acidity and low (10%) alcohol. On its own it makes for an odd wine, but Olivier feels it could have a future as a blending partner with the region’s renowned Tannat, which when ripe, can produce wines with overly high alcohol.

However, as a female vine, it is currently forbidden by INAO (the French organisation which governs the Appellation Contrôlée) to be grown commercially and no exception has yet been granted, so it may be a while before we see Pedebernade No5 (or whatever it ends up being called) appearing in Saint Mont’s red wines.

Pinenc RH4 – by contrast with the first variety we tried, this made a quite delicious wine, with the juicy red fruit and hint of pencil shaving that I associate with regular Pinenc/Fer, but with greater aromatic intensity, complexity and ripeness, while maintaining its freshness.

This is a particular selection of the widely-grown (in Southwest France that is) Pinenc. This version of it almost died out because the short, almost non-existent stalk between the vine and the grape bunches made it difficult to harvest – one person could harvest around 200kg of this per day, compared with 1,000 kg for “regular” Pinenc. In the 1970s, inferior quality clonal selections were made which facilitated more efficient harvesting, but which sacrificed quality to ease of picking.

Olivier hopes to have this RH4 version in commercial vineyards within two years.

Other varieties in the line-up were of interest because they add to our knowledge of the interrelationships between varieties. Dubosc No 2 made a nice enough wine, but the real interest lies in the fact that it is related to the variety Madeleine Noire des Charentes, which is itself “an awful grape” according to Olivier, but nevertheless important in our understanding of grape varieties as it is a parent of internationally renowned Merlot and Cot (aka Malbec). In vines, as in life it seems, a close genetic relationship is no guarantee of quality.

This is all very interesting in its own way, but what about wines that you might actually be able to buy?

How about a taste of wine made from vines planted in 1890, some of the very first to be grafted onto American rootstocks in the wake of the devastation caused by the splendidly named pylloxera vastatrix? 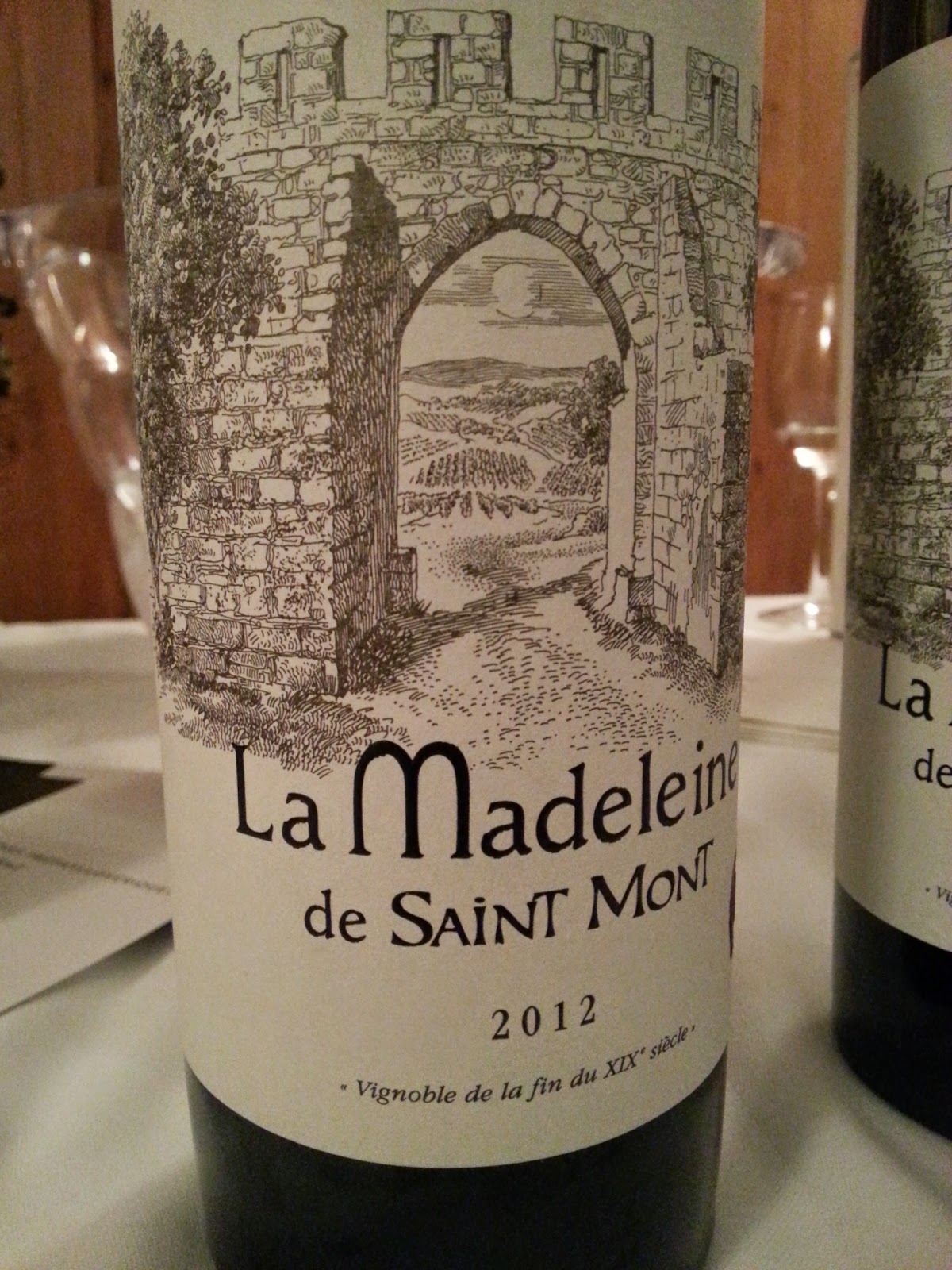 Do not be in any hurry to drink this, though; it has many years ahead of it.
at 03:02 No comments: