In these dark and uncertain times...invest in wine

Pétrus is recognized as the King of Claret. Or perhaps it should be the Queen, as it was served at the wedding of the then Princess Elizabeth and Philip in 1947. This is a wine coveted by millionaires as, starting at around £2,500 a bottle, it is unlikely to be served at most of our dinner parties. What, we wonder, will be the principal wine served at the nuptials of Prince William and bride Kate?

There is enormous cachet attached to Pétrus, partly due to its small production, around 30,000 bottles, from its 30-acre family-owned estate in Pomerol, near Bordeaux. The entire harvest can be completed in just half a day, allowing the owners to pick at optimum ripeness. The virtuous circle of high prices and small quantities mean that attention can be lavished on each drop of the precious wine, from vine to bottle.
Every vintage of this wine is acclaimed as a classic, but some are raised to a pinnacle of achievement, such as the 2000, rated a perfect 100 points by Robert Parker, and currently selling at auction for around £4,000 a bottle. Apparently the secret to its success is, of course, that peculiarly French notion: terroir.

Terroir is a shorthand to describe the unique combination of climate, aspect and soil on which the vines are grown. Pétrus sits on a clay “boutonnière” (or buttonhole, a poetic image) above the Jurassic limestone-based gravels of surrounding vineyards. The combination of moisture-retentive clay and free-draining gravel makes for a perfect environment for the Merlot grapes which make up 95% of the blend of Pétrus.
Bordeaux wines are hot tips for investors, particularly with the increasing Far East, especially Chinese, market demand. Wine investment houses report that Châteaux Lafite and Mouton-Rothschild were the best-performing commodities in 2009. Fine wines generally produced a return of 10.9%, the same as crude oil, and certainly out-performed the UK property market with returns of 8.2% AGR.
Lafite especially seems to have a particular appeal for the Chinese, with the result that its wines are trading at up to twice the price of the other four Bordeaux first growths, a kind of fine wine premiership. Mouton-Rothschild is famous for commissioning a different artist to create a unique artwork to adorn the label of its “grand vin” each year – and it is surely no coincidence that, this year, it has chosen Chinese artist, Xu Lei, to complete the task.
The Bordeaux wine trade shamelessly talks up each vintage and is famous for announcing the “vintage of the decade” at least three times every decade and even talked of 2005 as the “vintage of the century”. Are they equipped with crystal balls, we wonder?
In recent years the UK wine-buying public has reacted to Bordeaux hyperbole and high prices by buying less. The Bordelais, however, care not a jot as they can sell pretty much all they can produce, no matter what the price it seems, to the burgeoning East Asian market.
There are a number of Bordeaux 2010 vintage tastings over the coming months at London venues which the two Heathers are pleased to be attending and we shall no doubt report back ecstatically, as we are probably due for another “vintage of the decade”. Unfortunately we are not invited to the upcoming auction sale of composer Andrew Lloyd-Webber's personal fine wine collection at Sotheby’s Hong Kong. The decision to sell in Hong Kong affirms this city’s newfound status as fine wine capital of the world. More fine wine was sold here than in the top auction houses in London and New York combined. (One has to question why he is selling off all his goodies – has he hit hard times? Perhaps Love Never Dies is indeed on its last legs!)
Just in case you are beginning to feel like you are reading the FT rather than The Surrey Advertiser we will come back down to the Surrey hills with a bump and let you in on the best Bordeaux buys available locally and at rather more modest prices than the exalted Pétrus.
You will be delighted to hear that one of our favourite locals stocks an excellent example of the 2005 vintage for you to try at the right opportunity. Château La Mission, Lalande de Pomerol 2005, £24.99 from Taurus Wines, Bramley is big, beefy and concentrated – sounds like Bovril, but be assured it tastes much better. Like Churchill, it has a distinct whiff of the cigar box about it. Don't discount this wine as too serious, as it's a good example of the right region in the right year and will be recognized as a bargain by all Surrey claret lovers.
Not to be sniffed at (metaphorically only) is L'Orangerie de Château Carignan 2008. The influencial critic, Robert Parker, included this wine is his “50 best value buys” in Bordeaux 2005 and gave this vintage 86 points. Mostly merlot and from just around the corner from St Emilion and Pomerol – at just £9.99 you can't go wrong . Taurus wines of Bramley stocks this one too and owner Rupert refers to it as their "house Claret".
We are fortunate to have some great independent wine stores in Surrey, and Ben Watkins of The Guildford Wine Company in Shalford certainly qualifies. Ben tells us that Bordeaux is selling at a rate of 3/1 against other French wines. His popular La Tuilerie du Puy 2006, £9.99 sells like hot cakes. It is an elegant, classy claret with a merlot suppleness which softens the rather stern tannins found in many wines of this genre. Ben’s bargain Bordeaux from a brilliant year is La Tour L’Aspic, Pauillac 2005 at £26.99. The name may suggest aspic jelly, but the wine itself is a firm, well-structured and masterful wine for drinking now, preferably with some time to let it breathe. If you have the patience, lay it down – it will continue to improve over the next five to ten years.
If you still think even these suggestions are expensive then consider the truism – only death is free, and that costs you your life!!!
at 04:26 No comments:

We did consider at the start of this New Year kow-towing to expectations and suggesting non-alcoholic beverages as ways in which you can flush your overloaded liver and whittle your expanded post Christmas waistline. But sorry, we won't be doing that.
But don't turn over - or whatever the online equivalent is. Yes, we know this time of year is one long round of detox, abstention and belt-tightening in fearful expectation of the Christmas credit card bill. So even more important is a sense of wellbeing in these dark times and, based on the premise that “a bit of what you fancy does you good “ we have come up with some ideas to brighten up your spirits in cold January.
Sunshine makes everyone smile, but if you can't spare the time or money to jet off to sunnier climes, then you can always pore over some holiday brochures (or more likely some internet pages), glass in hand, for a taste of the good life.
Recently we and intrepid tasters pitted ourselves against the snowy elements to sample some wines, which brought a smile and a transfusion of bonhomie to the throng. We've selected a few highlights to tempt you here. Whether in a party or tucked up warm at home, transport yourself to the sun and dream of the not-too-distant shores of sunny Spain and Portugal with our winter sun wine recommendations: 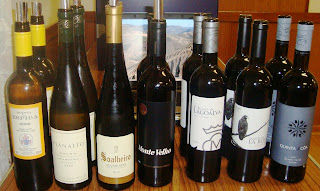 Soalheiro Alvarinho 2009 (£13.95 from The Wine Society)
Soalheiro means “sunny”, so where better to start? This is technically a Vinho Verde, from northern Portugal – but it's a million miles away from the bog standard stuff. This 100% alvarinho (aka albariño) is seriously delicious, with a hint of spring blossom, peach – and a whiff of the Atlantic. Picture the scene: surf’s up on Guincho beach – favorite Atlantic hangout for surfers and wind riders - chill out, drink in the tang of the ozone and imbibe with delicious piri piri prawns or scallops. 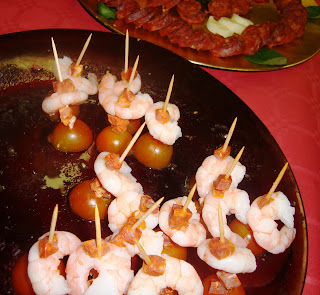 Quinta de Lagoalva 2009 (£6.50, The Wine Society)
This 50/50 blend of touriga nacional and castelão, with its violet-scented, soft, spicy fruit is a perfect mid-winter, mid-week treat. The floral bouquet insinuates itself into your imagination and suggests wild flower be-decked hillsides, views for miles, castles on the horizon and the romance of Moorish southern Portugal in its springtime glory.
Legaris Crianza 2007 (£12.99, Taurus Wines, Bramley)
A 100% tempranillo from Spain's highly-regarded (and highly-priced) Ribera del Duero region, this relative bargain is a smooth, supple and sophisticated wine that would infinitely improve any winter warmer casserole. Imagine the exhilaration of swishing through the snow of the sunlit Spanish Sierra Nevada ski resorts and enjoying melting in the afterglow with this crimson stunner.
Quinta do Côa 2007 (£14.99, The Guildford Wine Company, Shalford)
Back across the border to Portugal's Douro valley – famous for Port, but increasingly making waves with its table wines. The Douro's beguiling cocktail of native varieties, including touriga nacional, touriga franca and tinta roriz (in fact tempranillo again) make for a satisfyingly complete wine with many nuances of aroma and flavour to enjoy. A big wine, but with grace and elegance too. The Côa Valley is a UNESCO World Heritage site, a wild and remote area known for its Paleolithic rock art. A ride up the river on a slow boat from Porto sampling wines from the vineyards en route is a trip worth contemplating as you soporifically sip and savour. Fine but simple dining is called for to complement this vintage. Red meat, either beef, venison or wild boar would be good – not scorched on the barbeque but lightly seared by a talented chef and served with élan, white tablecloth and silver cutlery please. 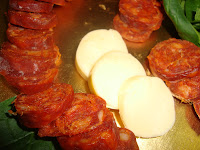 ...Are you drooling yet?
Thinking of food, nearer to home and back in time to a pre-Christmas carol concert party: Heather A was delighted to meet some of the students from the facing page to us, from Tante Marie Cookery School. They were a charming and talented bunch of young men and women and made some amazing canapés, a few of which disappeared down the throat of yours truly before being hoovered by the ravening hordes. In the spirit of neighborliness and an excuse for a good party we think it would be a great tasting experience to combine in a wine and food matching evening with you Surrey Advertiser aficionados and the Guildford glitterati. Anyone up for this we would love to hear from you at www.redwhiteandrose.co.uk
Now we are in 2011 we can all look ahead optimistically to a good vintage year in all senses, wonderful wines and prices to make the producers weep. In the spirit of Auld Lang Syne share a cheering glass or two with good old friends and new acquaintances. It is a truism that – Water divides the peoples of the world, but wine brings them together.
We wish you a wonderful year with the Heathers being the only reason for an “H” in your wine!
HAPPY NEW YEAR
at 04:51 No comments: