The Dorchester, that “Grand Dame” of Park Lane London was the very smart venue for a tasting of “A selection of the best wines of Tuscany”, dutifully and anticipatorily attended by yours truly Heather and Heather. The ballroom was transformed into a heady and aromatic marketplace of stalls, all clamouring for the attention of prospective wine buyers, distributors and press attention such as ourselves. Every space was filled with a seething mass of Italian verbosity and gesticulation - delightful but oh so difficult to balance a wine glass in the throng!
I think it fair to say that we have never before attended such a popular exposition and decided that, as the invitation included an Italian-style lunch at the revered Dorchester, this could be part of the attraction.
Indeed we have to say that upon further observation, the interest in the eating (of course with suitably matched vino in hand) rather outweighed the attention being paid to classifying the merits of the various Tuscan wines showcased at the event. In other words, it was a mad bun-fight…..or maybe truly representative of all things Italy.
After a jostled antipasto Heather D declared it was time to go, as a rather calmer tasting of Languedoc wines was also on the agenda for the day and shouldered her way to the exit and the relative peace of Hyde Park.
Tuscany is, of course, home to Chianti, one of the most recognizable names in wine. Where wines benefit from a famous name to help them sell, like Chianti, Rioja or Chateauneuf-du-Pape, it's a reasonable rule of thumb that 1/3 of them will be very good, 1/3 OK and 1/3 fit only for the cooking pot – but sadly prices are not a reliable guide to which is which. Before leaving the crush at the Dorchester, Heather D tasted a near-perfect example of Chianti, which she felt it was her duty to pass onto you , however tempting it is to keep to ourselves! Castello Vicchiomaggio Vigna la Prima Chianti Riserva 2007 is far easier to appreciate than to write. Vicchiomaggio is a traditional estate, in the heart of the Chianti Classico region, and has been making wine since the 5th century. Unsurprisingly, the wine is distinctly old-style and certainly none the worse for that. Ripe, combining sweet-savoury flavours; elegant, smooth as silk but with a certain juicy opulence, it is worth every penny of the £27.90 being asked by slurp.co.uk.
Heather A decided that she was in for the “secondi” – and sense of adventure paid off as she found a quiet haven in a hidden salon where all the prize winning fine wines were being elegantly served – persistence pays off!
Not being a believer in saving the best till last the favourite of the day was Rocca delle Macie Ser Gioveto Toscana IGT 2006. The 2004 vintage of this wine is available from Godalming-based merchants, Imbibros for £26.95 a bottle. Ser Gioveto is an award-winning wine from the dynamic and highly regarded Rocca delle Macie winery in the Sienna zone of Chianti, renowned for their low yields, green harvesting and manual picking of the fruit. The wine has a mature caramel-y tannicity and a velvety texture. It enfolds you in its arms like a big jovial country woman, a Pillar of the Earth indeed, Hemingway-esque we could say, but that would of course be Spanish rather than Italian…hopefully you get the gist.
Sasso al Poggio Toscana IGT 2005 from the Piccini family estates is distinctively different, the first whiff of the bouquet gives you blue cheese rind and the first sip a slightly bitter almond herbal taste. Don´t let this put you off, it develops wonderfully well in the mouth and the lingering finish leaves you wanting more. You can pick up the 2009 of this wine for £8.10 from online merchants, slurp.co.uk.
La Querce is a small wine estate in the Florentine hills area of Chianti. Their simply named La Querce Toscana IGT 2007 is a softly tannined, sensuous wine, a young but completely well-formed specimen having gained character from surviving the sometimes harsh climatic conditions by drawing on the water reserves created by the clay terroir. Sadly, this is a wine that you will need to seek out if you are planning a holiday in “Surrey by the Med” this summer, as it isn't currently imported into the UK.
Villa la Ripa overlooks the lovely medieval town of Arezzo, where recently discovered Etrusco-Roman remains have shown this to be one of the oldest vineyards in the region. Winemaking here is carried out with the greatest respect for the terroir located on a limestone plateau where the ancient vines produce some of the regions finest great growths. Tiratari Rosso di Toscana IGT 2008 is an elegant, full bodied wine with excellent ageing potential. It has something of the scent of warm clover meadows to entice your senses and if you want to give it a try, Secret Cellar of Tunbridge Wells have the 2005 for £19.49.
Spring is here, the proverbial green shoots now bursting into bloom, lawn trimming becoming obligatory and house renovations underway for so many of us, a busy time not just for the birds. Take time-out to breathe in the stories, history and romance and enjoy the vivacious new selection of wines from the epicentre of the old world, transforming themselves, Armani-style, to be the must have labels of today.I
at 08:48 No comments:

Flood, fire and for some the worst of all - the brimstone of losing the Ashes to the Poms. It’s enough to test the spirits of even the hardiest outbackers of Oz. Australians are fiercely proud (in a laid back sort of way) of their country and their achievements and there is no doubt that their pioneering spirit will prevail against the recent catastrophes visited upon them. It’s a testament to their can-do attitude that Australia has embarked on a wide ranging media campaign extolling the many wonders of their land down under, making it clear that they are still ready to welcome the world’s tourists.
Wine has, of course, been a key ingredient in Australia’s winning ways since the 1980s, when their “sunshine in a glass” was a breath of fresh air (or should that be sip of cool wine) for UK wine drinkers. It’s hard now to conjure up the excitement that these new arrivals caused at the time: varietal labelling! No funny foreign-sounding and unpronounceable wine regions! Back labels, telling you something about the wine – in English! It must have felt like a little bit of wine heaven had fallen to earth.
However, where the successful lead, others follow and those first Australians were soon joined by a host of “me too” crowd-pleasing wines. Argentina, Chile, South Africa, even those upstart fellow Antipodeans with their “cat’s pee on a gooseberry bush” sauvignon blancs. In order to stay ahead, you’ve got to innovate and indeed many Australian winemakers in the intervening years have been working hard to produce individual, expressive wines that taste of where they come from. This has been great for drinkers who are prepared to pay a little more and who want to move on from the fruit bomb styles of those early hits.
Unfortunately, the UK wine market has been dominated by the pile ‘em high, sell ‘em cheap big brands – you know the ones we mean. The 3 for £10, the BOGOFs, the was £7.99 now £3.99 wines. They serve a purpose, but exciting and elegant they are not.
Australia now finds itself in the unenviable position of having to scrap with the other discounters at the bottom end of the wine mass market and losing share as a result. The double whammy is that we are also somewhat reluctant to spend more on Australian wines, because of the cheap and cheerful image that deep discounting promotes. Over ten quid for an Aussie shiraz? Shome mishtake surely?
If we would all be prepared to spend a little more on a bottle from downunder, oh the delights that await. And, yes, we’re always banging on about this – but it’s true. Fixed costs on a bottle of wine (duty, VAT, shipping etc) mean that there are literally pennies left to spend on the actual wine itself if we pay around £4 in the supermarket. Up the bottle price to £8 or £10 and the winemaker has more like pounds to spend on putting something decent in the bottle. You know it makes sense.
Regionality is a big buzz word in Australia right now. In a country the size of Europe, so it should be. A chardonnay grown in the Margaret River in Western Australia is not going to taste the same as one grown hundreds of miles away in the Adelaide Hills.
Here are some of our favourite Aussies du jour that show just a hint of what this subcontinent of wine can do: 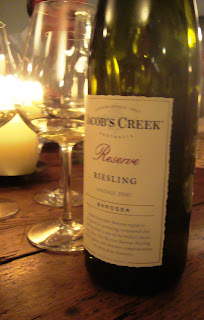 Jacob’s Creek Reserve Riesling 2010 - £9.99 at Tesco.com and Tesco Wine Club
Jacob’s Creek we hear you screech! Yeah but, no but. Yes, it’s Jacob’s Creek, but it’s part of their new regional reserves range (and try saying that after a glass of Riesling). The fruit for this wine hails from the Eden Valley zone of the Barossa region – a noted hotspot for cool-climate loving Riesling. And don’t worry that it might be sweet – this is bone dry, with hints of lime blossom and citrus acidity that make it a great friend to fish.
Jacob’s Creek Reserve Shiraz 2007 - £9.99 at Tesco.com and Tesco Wine Club
Oh well, in for a penny… This shiraz is from the warmer part of the Barossa, responsible for the most distinctly Australian tasting shirazes, which develop a whiff of saddle leather as they age – which is a good thing, honest. Let this youngster seduce you with its aromas of fruitcake and plum, hint of chocolate and soft, ripe tannins – definitely a red meat wine.
Shaw & Smith Sauvignon Blanc 2009 - £11.99, Taurus Wines (Bramley)
Not a gooseberry bush (or indeed a cat) in sight, this sauvignon from the Adelaide Hills near, well, Adelaide, is full of understated herbaceous and floral appeal. A class act.
Cullen Sauvignon/Semillon 2009 - £19.99, the Guildford Wine Company (Shalford)
Margaret River in Western Australia makes fantastic red Bordeaux blends as well as world class chardonnay. But we’ve chosen this distinctively Australian blend of sauvignon blanc and semillon, made by Vanya Cullen from her biodynamically farmed vineyards. The zip and pungency of the sauvignon is given added weight and depth and a certain limey punch by the semillon. This delicious and lively wine is perfect for spring.
We’re not often in the position of feeling sympathy for the Aussies – so go on, raise a glass of one of these delicious wines and show your solidarity. Howzat!
at 04:31 No comments: