Confessions of a wine obsessive

I read an article recently by food writer Diana Henry, “Help! I’m the only foodie in the family”, in which she contrasts her love of great food with her partner and children’s more relaxed attitude to it. She plans trips to special restaurants while on holiday, while her husband wonders what’s wrong with the one across the street; one son proclaims that he likes his food “bland, bland, bland”.

I sympathise with Diana’s position and wonder if there is something similar going on in my own family.

As you might imagine, I find the minutiae of wine infinitely fascinating. My husband likes a glass of wine as much as the next man, and has gratifyingly broad tastes. But he is in no way obsessed with the stuff: his spirit does not instantly lift at the sight of grape vines; he can ask polite questions of winemakers while tasting their wines, but doesn’t feel the need to get to the bottom of exactly what kind of soil the grapes came from, nor the intricacies of the oak ageing regime.

Do I drive my family mad with my non-stop wine monomania? Here is the case for the prosecution.

The wine cupboard is full of inviting-looking bottles, but only I know whence they came and therefore which particular one is suitable for opening tonight.

There is no standing still in the wine world and I am relentless in my pursuit of the new:

Him: This is really nice, why don’t we buy a case of it?
Me: No! We can’t just keep drinking the same thing, what would be the point of that?

I may forget key things on the weekly shopping list, but when it comes to remembering wines I’ve had, my memory is prodigious.

Me: does this wine remind you of anything?
Him: Umm, no.
Me: It’s an Alsace Riesling – we had one very like this at a meal out last year, remember?
Him: (wearing a look of incredulity mixed with blank incomprehension) No.

But would I really like to be married to someone every bit as obsessed with wine as I am? It could get very competitive and, I fear, make us a rather dull couple, with no-one to rein in the endless discussions of fruit character and terroir.

You might think the children of a wine buff would get off lightly, but no.


Holidays are often (OK usually) centred on wine producing areas. On a road trip round France in our camper van, we managed to hit quite a few of them. As we drove through the vineyards of Châteauneuf-du-Pape, I pulled over, clambered out of the van and crouched down among the vines to take pictures of the large pudding stones that cover these famous vineyards.

A mile or so further on, I stop again.
“Mummy, why are you taking MORE pictures of stones?”
“These stones are better.”


But there is an upside. The other day we (or more probably just I) were chatting about Champagne. I mentioned “Moët” and my 12 year old casually added “et Chandon” as he helped clear the dinner table. That kind of knowledge will never go to waste.

Where did it all start?
Rather grimly, with the martyrdom of a man named Valentinius in around 270AD, just outside Rome. It seems he was beheaded on the orders of Claudius II for helping Christian couples to marry.

How did we get from martyrdom to hearts and flowers?
It’s possible that Chaucer, he of the Canterbury Tales, may have begun the tradition of celebrating love and lovers on St Valentine’s day. Certainly one of his poems, The Parliament of Fowls, includes these lines:

“For this was on seynt Valentynes day,
Whan every foul cometh ther to chese his make.”

Chaucer was obviously a lousy speller and his words can be “translated” thus:

“For this was Saint Valentine’s Day,
When all the birds of every kind that men can imagine come to choose their mates.”

How best to show your love?
You have options here.

The grand gesture. The grandest of the grand is probably the Taj Mahal. This fairytale palace is in fact a mausoleum built by Shah Jahan as a memorial to his favourite wife – a double-edged compliment if ever there was one. Not least because, by definition, the wife in question didn’t get to see the gesture. And the other wives must have been livid.

The slightly saucy. If you’re thinking underwear, I’d steer clear of anything too raunchy (or red), but remember the wise words of Dorothy Parker, “Brevity is the soul of lingerie.”

The failsafe – something sparkling!

Pink Prosecco is an aberration in my book and most Cava Rosado is very basic – so rosé Champagne it is. It’s the classiest option and food and wine matching is simple: pink wine, pink food. Think salmon, lobster, prawns etc.

Veuve Monsigny Champagne Rosé - £15.99 from Aldi
A winning combination of strawberry fruit and digestive biscuit-y-ness at a bargain price.

Morisson’s M Signature Champagne Rosé NV - £20
This is quite deeply coloured and full flavoured thanks to the high proportion of Pinot Noir – more for food than aperitif.

Charles Mignon Premier Cru Brut Rosé NV - £35 from M&S
A step up in quality, this is a beguiling combination of purity of fruit with grown up elegance. 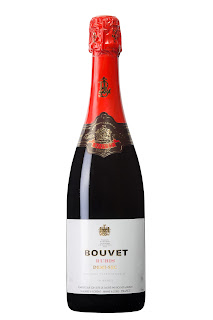 It has lovely sappy and fresh red cherryish fruit with a hint of pencil shaving and is very moreish. This would be great with a meaty main course.

No other wine has developed a mythology around it in the same way as Champagne. It is a drink that is inextricably linked in our minds with celebration, marking important events, drunk by royalty and the aristocracy.

High prices account for some of the cachet – but how would you feel about Lewis Hamilton celebrating an F1 win by glugging from a magnum of Château Lafite on the podium, having first doused the runners up with some of it? All wrong; a bit loutish and binge drinky. But if it’s a jeroboam of Mumm (soon to be replaced by Moët & Chandon apparently) that’s perfectly normal.

Champagne has worked hard over the years to build up its myths – and foremost among them is the story of Dom Perignon.

Dom Perignon was a Benedictine monk who became cellar master of the Abbey of Hautvillers in Champagne in the late 17th century and he is credited with making the first sparkling Champagne. Up until this point, wine from Champagne was still, and either light red or “vin gris”, a pale onion-skin rosé.

The story goes that the blind Dom Perignon, having uncorked his first bottle of sparkling Champagne, summoned his fellow monks, saying “Come quickly, I am tasting the stars.” There is a statue depicting this very moment outside the headquarters of Moët & Chandon today.

But if, as seems likely, Dom Perignon did produce sparkling Champagne, it was almost certainly unintentional and very probably viewed as a winemaking fault at the time.

Wines from the region sometimes failed to ferment all their sugar before the onset of cold winter weather, which caused the yeasts to shut down. This had been happening, albeit haphazardly, for many years. With the arrival of warmer weather in spring, the yeasts would start up again, fermentation would re-start and carbon dioxide was produced as a result. If the wine was still in cask, the gas would be able to dissipate before bottling, resulting in a normal still wine.

However, during the later 1600s, technological advances such as stronger glass from England and the use of corks to seal bottles meant that some wines would have been in bottle with some yeast and sugar in suspended animation. Come spring, the renewed fermentation would lead to the carbon dioxide produced being forced into the wine, making it effervescent.

So the process of making sparkling wine in Champagne was neither controlled nor understood, and was largely unwelcome - and Dom Perignon certainly didn’t “invent” it. In fact he may have been actively trying to prevent it. Ironic, then, that this is what he is honoured for now.

However, he did contribute many beneficial advances in wine-making. Amongst other things, he is credited with important innovations such as making a completely white wine from the region’s red grapes, rather than the pale “vin gris” by, for example, inventing the shallow basket press and treating the grapes with care, pressing them quickly but gently to avoid any skin colour tainting the juice. All things which are still important in Champagne making today.

But all that “tasting the stars” stuff? It’s a bit of Champagne spin.

This is the hardest wine column of the year to write – and, probably, the least read, which is a cruel combination. Here I am, struggling to rekindle my interest in all things wine, and you are probably off the booze altogether, at least in theory. This is a lean time in the wine writer’s year; the vinous “hungry gap”.

Not to be put off, I’ll seek to entertain you on the subject of wine, so grab a cup or glass of something and settle in. I’m not really a believer in New Year’s resolutions, which are destined to become a stick to beat yourself with, when the almost inevitable failure comes – usually before January is out.

However, here’s a little (wish)list of things I’d like to achieve this year – on the wine front that is. I won’t bore you with my list of house maintenance ambitions.

1.   Knuckle down to Champagne study. Less indulgent than it sounds, I promise.
2.   Continue the noble, and almost certainly doomed, struggle to get UK drinkers to love Riesling.
3.   Drink more Riesling. Yes, even I feel like I’m letting the side down and could do better.
4.   Visit at least one new wine region. Yes, it’s a tough job, but….
5.   Taste a new (to me) grape variety every month. You wouldn’t believe how many varieties there are – Jancis Robinson et al’s Wine Grapes encyclopaedia lists 1,368 of them.

And what of the elephant in the room? Yes, I must try to achieve all this while abiding by the new alcohol consumption guidelines of no more than 14 units of alcohol a week, spread over 3 or 4 days.

Which brings me to my wine prediction for the year – we are going to be seeing the development of many more, lighter alcohol and even alcohol-free wines to feed our need to glug a glass of wine without stacking up the units.