I've visited a fair few vineyards in my time, but a winery with a menagerie attached was a new one on me. 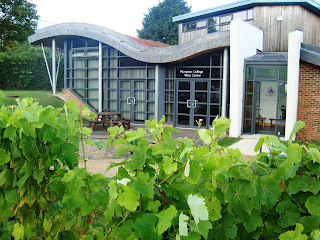 At Plumpton College, tucked into a fold of the South Downs just below Ditchling, you can study vine-growing and wine-making in their brand spanking new Wine Study Centre. On your way to the vineyard though, you might find yourself distracted by Tony the Hawk, or Elgar and Egor the owls, or even Iggy the Iguana (that name I may have made up, but it's the obvious choice) who are all residents in the adjoining Animal Care Centre.
As the English and Welsh wine industry grows ever larger, with around 400 vineyards currently in production, there is a burgeoning demand for a homegrown solution to training tomorrow's wine-makers and Plumpton College is meeting the need. 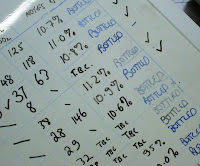 Wine production has been taught here since 1988, when they started out with just a few rows of vines and some demi-johns to ferment the resulting juice in. Things have moved on in the intervening years and now around 150 students are here at any one time, learning hands-on how to train, prune, spray and tend the vines; then how to ferment, rack, pump over, fine, filter age and bottle the final wines. Not to mention learning how to drive and manoeuvre a tractor, a vital skill for anyone looking to be of any help in a vineyard. 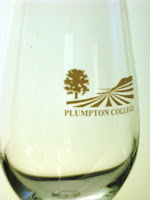 Unlike the product of most diploma courses – wads of paper, files and bumf which gather dust over the years before finally succumbing to the recycling bin – Plumpton students' labours have a very tangible, nay drinkable, result. Each year Plumton produces 15,000 bottles of wine which are all available to buy. I tried four of them on my visit and was impressed by the fact that all were not just drinkable, but of a commercial standard. Their biggest customer is a seafood restaurant in nearby Brighton.
And you can try them too, to judge for yourselves whether the future of English winemaking is in good hands. Waitrose stocks two of Plumpton's wines: their sparkling white and rosé.

Plumpton Estate, “The Dean” Brut NV - £18.99 at waitrosewine.com
Plumpton Estate, “The Dean” Blush Brut NV - £18.99 at waitrosewine.com
As with most pink fizz, this is made by adding a small amount of red wine, made from Plumpton's own pinot noir grapes, to their regular white sparkling wine. Although non vintage, this is based on the 2008 vintage. The colour is a pale smoked salmon rather than pink and it has an invitingly creamy nose. It might be maturing faster than it ought to, but it's a great pleasure to drink now with plenty of sherbetty acidity and an elegant finish that leaves you wanting another sip.
As well as teaching the next generation of UK (and Indian and Scandinavian) winemakers, Plumpton is also setting up a Research Centre, which will help to support the UK winemaking industry by undertaking scientific research into areas that mean little or nothing to wine drinkers, but are of intense interest to winemakers. I learned, for example, that English chardonnay must (juice) destined for sparkling wine has much greater “foamability” than its French counterpart in Champagne. Who knew? 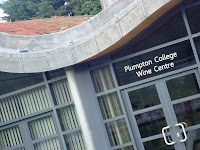 Plumpton College is generally not open for casual visitors, but you can find out about their various courses for those interested in learning about the practical and business side of wine on their website: www.plumpton.ac.uk. But be careful, you could find yourself getting distracted by the wildlife...

A few miles up the A23 from the college is Bolney Estate, an English wine success story, whose winemaker, Sam Linton, is herself a graduate of Plumpton. Bolney, then known as Bookers Vineyard, began making wine back in 1972, from just 3 acres of vines. Now they have over 39 acres under vine and plan to produce over 200,000 bottles of wine in 2012.
Sam, daughter of the owner and founder Rodney, has a gift for making delicious red wines – always tricky in our really too-cool climate – and consistently makes one of the country's best pinot noirs. Her sparkling wines are pretty good too.
Here are my favourites from the range:

Cuvée Rosé 2008 - £23.99 from Bolney
100% pinot noir traditional (ie same as Champagne) method sparkling wine. There's a lovely leafy and floral lift to the strawberries and cream nose and the palate has plenty of juicy red fruit.

Cuvée Noir 2009 - £19.99 from Bolney
You might have come across rather thick, treacly sparkling red shiraz before. This is a red wine and it is sparkling, but the Bolney wine is altogether a different beast from those Australian heavyweights, made from Dornfelder grapes. It manages to combine light, juicy frivolity with more serious wine characters and has a delicious hint of cocoa bitterness on the finish which makes it food friendly – great for barbecues, says Sam.
Waitrose also stock Bolney's Dark Harvest red blend, which is a very accomplished English wine. It's a soft and spicy, slightly earthy mouthful of blackberryish fruit. £8.99 at waitrosewine.com
To sample and buy the full range of Bolney Estate wines, you'll need to take a trip down the A23 to the vineyard, where they run tours and tastings every day except Sunday. Find out more via their website on: www.bolneywineestate.co.uk.
at 02:02 No comments:

Vinho Verde: not just white and certainly not green


We all think we know what to expect from Vinho Verde. It's a white wine from northern Portugal that is bracing in its acidity, very light bodied and usually with a hint of soluble aspirin spritz about it.

Well you and I both know that this would be a very short article if that were the case. I would simply usher you onto the next page with a “Move along people, nothing to see here...”

Therefore it will come as no surprise whatsoever that there is more to Vinho Verde than something that resembles lightly alcoholic, slightly flat mineral water. 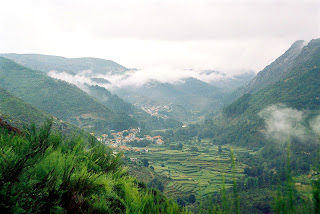 For a start, Vinho Verde can be red (or rosé, or indeed sparkling). The name refers to the region, rather than describing the wine. So it's the vast expanse of verdant, not to say rain-soaked, vineyards in this chunk of northwest Portugal which are green, rather than any of the wines which emanate from them.

The vine in its natural state originally evolved to scramble up trees, and in Vinho Verde vines were traditionally allowed to grow this way, either twining through branches or along wires strung between the trees. This makes pruning the vines and picking the grapes a time-consuming – and even dangerous – process. You certainly need a head for heights. And a very long ladder.

Most vines nowadays are more commonly trained along wires at a more picker-friendly height, so the vineyards look much like any other across the world. The wines themselves, however, maintain a delightful individuality, with a style all of their own. Not least among their charms is a tendency to low alcohol – many of these wines are just 11 or 11.5% - perfect for a lunchtime glass.

Quinta da Aveleda 2010 - £7.25 from www.drinkfinder.co.uk
A classic mix of traditional varieties make up this textbook example of white Vinho Verde: Loureiro, Trajadura and Alvarinho. It has a mineral, iodine nose, redolent of the sea. There is a definite spritz on the palate and very crisp acidity, but plenty of flavour too and a touch of soluble aspirin on the finish. Very fresh, very individual. 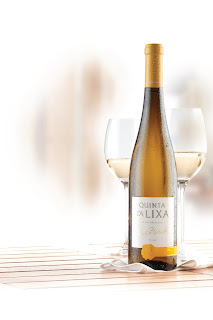 In a similar vein to the Aveleda, though it has a softer feel in the mouth. There is less driving acidity and rather more fruit, making for a gentler and less uncompromising wine.

Quinta de Gomariz 2010 - £9.99 (mixed case price) from The Wine Reserve in Cobham
Rather than blending, this producer makes several wines, each made from a single traditional variety. The Wine Reserve stocks their Loureiro, which has an intensely floral scent, verging on violets. The palate has Vinho Verde's hallmark crisp acidity, citrussy fruit - and only 11.5% alcohol. While you're there, you might be talked into trying the Gomariz rosé and red, which they also stock.

If you get the chance, look out this producer's single varietal Avesso, a variety that you'll rarely see unblended. The nose is bracing, like a breath of sea air. The palate has a lovely weight of rich, citrus fruit, with a hint of citrus pith bitterness too.

Quinta do Soalheiro 2010 - £13.95 from The Wine Society
Fourteen quid for a Vinho Verde? Here's a quick lesson in wine geography and how to spot a bargain. Just across Portugal's northern border is the Spanish region of Galicia, which is renowned for its white wines made from the Albariño grape. Famously a seafood wine par excellence, you'll be lucky to find a good one for under £15 in this country.

The same variety, back in Portugal, is known as Alvarinho and is a familiar grape in many a Vinho Verde blend. Some producers are now wanting to highlight the star qualities of the variety by making a pure Alvarinho Vinho Verde – but pound for pound, you get a lot more quality for your money on the Portuguese side of the border.

The Soalheiro has a pure, mineral nose. The palate is quite weighty and there is not even a hint of spritz. What impresses most is that it manages to strike a wonderful balance between the abundant ripe fruit and lip-smacking freshness, making for a serious, yet lively wine: a beguiling combination.

Afros 2010 - £8.82 from Les Caves de Pyrène, Guildford
A red Vinho Verde (I did promise they existed) which will certainly pique the interest of adventurous wine lovers. It's an uncompromising sort of wine, which has to be experienced – though I can't promise that most people will enjoy it. The dark-fleshed Vinhão grapes make for an intensely-coloured, deep purple-to-ruby wine. There's an initial big hit of full-on, sour fruit, the tannins are low, but there is something very green and grippy at the back of the palate. Tight acidity provides the structure and a slightly unexpected (but pleasant) perfume emerges on the finish. You might not be surprised to know that this wine is biodynamic. Caves de Pyrène also stock Afros' rather more mainstream white Vinho Verde.

Doesn't sound like your cup of tea? Come on, it's only a bottle of wine and wouldn't life be boring if they all tasted the same?
at 06:54 No comments: