Jura - land of the laughing cow and yellow wine

Have you ever had a wine from the Jura? I'm guessing that for most of you, the answer is no. This little (and little-known) region is tucked away in a hilly region of eastern France, above Switzerland and about level with Burgundy. It's a land of rolling green hills, a prelude to the Alps, rich for agriculture and famous for two things – wine and cheese.

In fact you have more chance of having tried the cheese: Comté. It's one of those big, flat wheels that we used to call “Swiss cheese” and it does have similar flavours to its Alpine neighbours, Emmental and Gruyère. The story of how it is made tells us much about the land here.

Comté is made primarily from the milk of cows, mostly Montbeliards, which graze the rich pastures of this region known as Franche-Comté. The isolated farming communities need a way to turn the milk into a food that keeps over the long winter months. Artisan cheeses such as this are made from a single day's milk, so if each small-holding farmer were to make cheese from his own small herd, only a small cheese would result, which would have limited keeping capabilities. In order to make a more sizeable and slow-maturing cheese, neighbouring farmers pool their daily milk production, which is collected by the specialist cheesemaker, or fruitière.

The fruitière undertakes the process of turning the milk into cheese. Each fruitière's cheeses have subtly different flavours, informed by the milk of the cows that produced the milk that day – outside, eating fresh spring grass mixed with wild flowers; indoor in the winter eating hay and so on. There are myriad different elements that go to make up the final flavour of the cheese – yes, cheese has terroir too.

Once the cheese is made, the job of maturing it is handed over to another specialist: the affineur. There isn't really a ready English translation of this term, but it means someone who matures (and often sells) cheese. The affineur will buy cheeses from a network of different fruitières, to give a range of quality and flavours to sell to the consumer. As the cheeses slowly mature in the cool dark conditions of the affineur, they are tested to determine their readiness and quality.

Top quality stuff is destined to be sold for eating. Those which have not quite reached the pinnacle are sold as suitable for cooking. Any that does not make the grade at all is sold to the “Vache Qui Rit” (The Laughing Cow) processed cheese factory down the road. I did say you had probably tried the cheese!

I do not need to tell you that there is often a strong link between the food and wines of a region, and the Jura is no exception. If you would like to enjoy the Jura food and wine match par excellence then you need to search out a bottle of Vin Jaune (literally, yellow wine) to go with your slice of top quality Comté.

Vin Jaune's story is at least as idiosyncratic as its cheesy partner. Savagnin grapes are harvested and made into wine in a pretty straightforward way, but they are then matured in oak barrels for at least six years and three months. This is the time needed for the special ageing process that gives Vin Jaune its unique flavours.

The barrels are not completely filled at the beginning, leaving space for a layer of yeast, or flor, to develop on the surface of the wine. Sherry aficionados will recognize this, as this same process plays a vital role in the production of fino, the light, dry style of sherry. The yeast flor protects the wine from oxidising and turning to vinegar and promotes the production of nutty, complex flavours. Unlike sherry, however, Vin Jaune is not fortified.

Vin Jaune is made all over the Jura, but the finest examples are widely regarded as coming from vineyards surrounding the small town of Château-Chalon. Its quality has long been recognized – indeed Prince Metternich, the power behind the throne of the Austrian Empire in the early 19th century, is said to have told Napoleon that the best wine in the world came from Château-Chalon. Though perhaps he was just trying to keep on the right side of his belligerent neighbour.

Where, I hear you say, can I buy such sought after and precious wine in Surrey? Les Caves de Pyrène, at Pew Corner, Artington, has a great selection of Jura wines, from Pinot Noir-like reds from the Trousseau grape; pale, almost rosé-coloured and sometimes funky reds made from Poulsard – and Vin Jaune, including this delicious Château-Chalon. 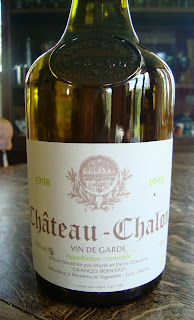 Château-Chalon 1998, Marie et Denis Chevassu, £39.49 for a 62cl bottle
Why a 62cl bottle? This is, apparently, the amount of wine left from a litre after evaporation during the ageing process. The wine itself is deep gold in colour with a complex mix of nutty, sherry-like aromas and flavours – some even find curry spice in there. 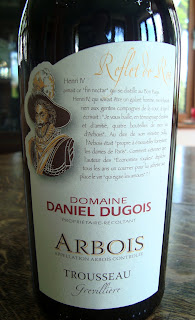 Trousseau 2009, Domaine Daniel Dugois - £16.99
An attractive garnet-purple colour and with plenty of clove-tinged, juicy berry fruits, this is a more straightforward and user-friendly introduction to the region. Try it with new season navarin of lamb.

As for where to find top class Comté in Surrey to accompany your glass of Château-Chalon – try a really good local cheesemonger and please don't settle for a triangle of Laughing Cow if you can't find any!