It’s not often I am drawn to deviate from my abiding fascination with wine, but at the recent Big Apple day at Much Marcle (yes, ‘tis real, not an Agatha Christie invention) I had my head turned by cider – and perry.

First things first – cider is made from apples and perry from pears. Both can be either still or sparkling. And, just as wine can encompass the most anodyne mass markets blends to the small and artisanal, so it is with cider and perry.

Cider is enjoying a renaissance in popularity in the UK, but the drivers are the mass market brands like Strongbow, Magners and Koppaberg. In my early years I was a sucker for a glass of off-dry Woodpecker cider and as a student thought Merrydown had a certain cachet. However, just as many of us are now taking more of an interest in how and where our food came to be, so there is a growing interest in learning about the origins of what we drink. The craft beer scene is burgeoning, can craft cider be far behind?

Although I’ve just said that cider is made from apples, in fact, legally, cider and perry only has to be made from a minimum of 35% fruit – with the rest being made from sugar (often corn syrup) and water. And with large-scale producers, this is pretty much what you are getting – sugar and water are a lot cheaper and easier to get hold of than actual fresh apples and pears.

I visited Hereford cider and perry producer, Gregg’s Pitt and got the chance to walk through the perry pear and cider apple orchards with the co-owner James Marsden. These orchards are part of our rural heritage: large, sometimes ancient trees whose size and unkempt air are a world away from commercial eating apple and pear orchards. Gregg’s Pitt itself is the name of a unique perry pear which originated on this one farm.

James speaks a language I’m familiar with from listening to winemakers: he revels in the individual character given by vintage variation, the mix of varieties used and the wild yeasts which naturally provoke fermentation – all those elements that are unique to their site and together make terroir.

So has my palate moved on from my early Woodpecker infatuation? I must confess that I still find most truly artisan cider a bit of a challenge, with its grippy apple tannins. But Gregg’s Pitt sparkling perry, a blend of the varieties Blakeney, Butt and Oldfield I was quite won over by. It’s light and refreshing, with a good balance of fruit flavour, acidity and grip – not unlike wine in fact. 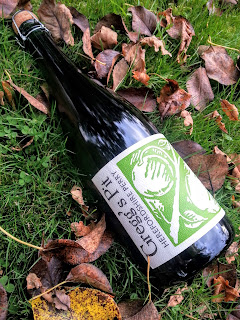 Perhaps grapes are not the only fruit after all.