Wines that look good at fifty

How many wines will happily last for over 50 years? You might think of the best Bordeaux classed growths, possibly the very top of Sauternes and really top class dessert wines.

If I add a qualifier – how many wines that you can buy for under £30 will happily last for over 50 years – and out go Bordeaux and Sauternes for sure. Now you need to turn to those great stalwarts of longevity: Sherry, Madeira – and Port.

Before you get too excited, that bottle of Cockburn's Special Reserve or Warre's Warrior that you snapped up for under a tenner last Christmas but never got round to drinking, is not going to last that long. Those ruby ports are designed for early drinking and are not going to improve in the bottle. It is the great vintage Ports from the major shippers like Taylor's, Dow's or Graham's which are renowned for their ageing ability, measured in decades rather than years.

It was the English aristocracy's habit to lay down a “pipe” (a port barrel, containing 55 dozen bottles) of vintage port from the birth year of their sons, so that their offspring would have sufficient to pass round after dinner from their 21st birthday on for most, if not all, of their adult life. With drinking habits like that, it comes as a surprise that the English aristocracy haven't pickled themselves into extinction.

If you fancy taking up where they left off, albeit on a more modest scale, a bottle of top quality vintage port will set you back upwards of around £60. So what happened to the £30 I drew you in with at the beginning? I'm getting to that.

The port houses decide whether a particular year will be “declared” a vintage, based on the quality of the wines made. In theory each producer makes their decision individually, but in practice there are certain years which most agree that the quality is high and there will be a “general declaration”.

Weather conditions in the Douro Valley, where Port is made, are notoriously harsh, with cold winters and blistering hot summers. The risk of drought is ever present and rain at harvest can be disastrous for quality. It is certainly not a foregone conclusion that great wine can be made each year.

Additionally, from a commercial perspective it would devalue the vintage Port brand if a house were to declare a vintage every single year. In the past decade the years 2000, 2003 and 2007 have all been declared. This means that there is no Taylor's 2004 vintage Port, for example, it does not exist. 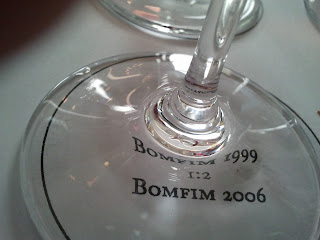 Which is where bargain-hunting vintage Port lovers come in. In those non declared years, port houses will still make a style of vintage Port known as single quinta. A quinta is simply the Portuguese word for farm and refers to a particular vineyard. To those in the know, names such as Taylor's Quinta de Vargellas, Graham's Quinta dos Malvedos and Warre's Quinta do Bomfim are bywords for high quality vintage Port, without, perhaps the huge staying power of the very top vintages.

In a declared year, these quintas will be responsible for providing key components of a house's vintage Port. In non declared years, they are bottled under the name of the Quinta and can be yours for somewhere under £30.

The generally accepted wisdom on single quintas is that they are ready to drink earlier than their straight vintage counterparts, and will not age much beyond 10-15 years. Based on a tasting of Symington family single quinta Ports going back to 1950, however, this might not necessarily be the case.

The Symingtons are one of those Anglo-Portuguese port families who remain staunchly English, despite spending all their working lives in the Douro Valley. The family has been producing port for five generations and is responsible for some of the biggest names in the port business: Graham's, Cockburn's, Dow's and Warre's.

The Graham's Quinta dos Malvedos 1950 might be more of an interesting experience than a classically enjoyable glass of Port, with its hauntingly ethereal floral perfume and hint of balsamic vinegar and even stout (as in Guinness) flavours.

The Malvedos 1958, however, would make an elegent ending to any meal. It is still sweet and richly flavoured with caramel and nuts, the structure has endured and the finish is incredibly long. How many of us would like to aspire to be in such fine form at 54 years of age!

Unless you have some of these wines already stashed away, I'm afraid you won't get the chance to try them, as literally just a few bottles remain. The currently available vintage for most single quintas is 1999, though you'll find a peppering of other years too. Here are my recommended ones to search out: 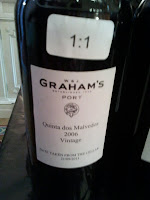 Graham's Quinta dos Malvedos 1999 - £30.56 (case price) from Imbibros near Godalming
This is beautifully perfumed, incredibly rich and sweet. There are flavours and aromas of pipe tobacco and sweet spiced cherry. Malvedos is famous for producing opulent, sweet ports and this certainly fits that profile. The sweetness would make it a great match for desserts – sticky toffee pudding or crème brûlée could be naughty but nice. 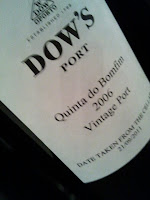 Dow's Quinta do Bomfim 1999 - £26.50 from Tesco, £26.96 (case price) Imbibros
Barely five miles from Malvedos, but a world away from it in style, Bomfim is renowned for its drier, more tannic and austere style. This one is rather more “winey” and with a less spirity nose than the Malvedos with lovely leafy notes. It is lighter bodied with more lifted aromas. Great on its own, but this would make a wonderful to finish a meal along with some nuts – and maybe a cigar, if that's your thing.

Cavadinha 1996 - £30 from Waitrose, £29.66 (case price) from Imbibros
Cavadinha produces wines that have a distinctive and attractive floral character on the nose. The palate has plenty of sweet, figgy fruit, with a savoury undertow and a nicely elegant finish.

Finally, a word to the wise. Paul Symington is seriously excited about the quality of the just completed harvest and says that “You'd have to be an idiot not to make great wine in 2011.” Will this be the first vintage declaration of the new decade? You heard it here first.


You can follow the progress of the 2011 ports in the making and get lots of in-depth information about the Symingtons via their blog, http://malvedos.wordpress.com/
at 08:17